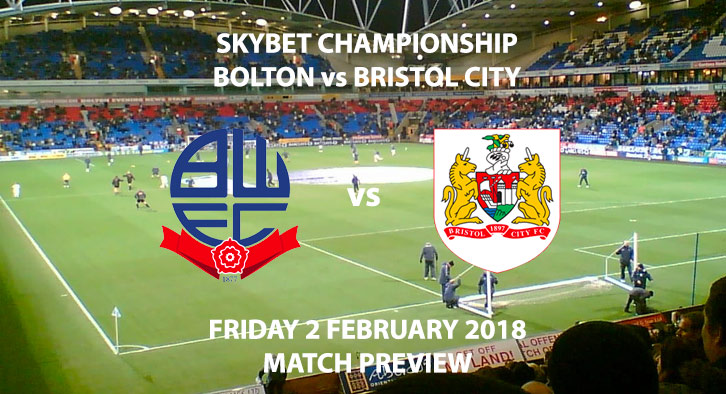 Friday night action in the Championship comes from the Macron Stadium for Bolton vs Bristol City.

Relegation-threatened Bolton host promotion chasing Bristol City with the visitors looking to narrow the gap to the automatic promotion places.

After narrowly missing out on a place in the Carabao Cup final, Bristol City can turn their attention to the league. They currently sit in fourth place, just two points behind Derby who occupy second. Despite their lofty league position, the Robins have won just one of their last eight games. That victory did, however, come last time out as they beat QPR 2-0 at home. With interest from Premier League clubs in a number of their star assets, it’s crucial that Lee Johnson can keep hold of his current players if they want to achieve promotion. Aden Flint, for example, has reportedly acquired the attention of Brighton and Derby with the club knocking back a six million pound bid last week. With a run of tough fixtures against play-off chasing sides, the next month could be decisive in the club’s season.

After looking dead and buried not along ago, Bolton are now out the relegation zone. A run of one defeat from their last four games has lifted them to 20th in the table, one point above the bottom three. Bolton are unbeaten at home in their last eight games, with Phil Parkinson’s side winning five of those matches. Gary Madine’s recent upturn in form has been crucial, with the former Sheffield Wednesday striker attracting the interests of Cardiff City. The 27-year-old has 10 goals this season and is the club’s leading marksman. If Bolton want to remain at this level for a second consecutive year, maintaining their home form will be pivotal to their chances.

Bristol City have won their last two fixtures against Bolton, scoring eight goals in the process. However, the Robins haven’t won at the Macron Stadium since 1994 and have lost on three of their last four visits. Andrew Madley is the referee for Friday night’s fixture, having refereed more Championship games than anybody else this season. Madley has an average booking points total of 30.2, which is low when compared to his fellow officials. He has averaged 2.9 yellow cards per game and is yet to show a red card this campaign.

Given Bolton’s recent home form, I think this one could be a draw. Bristol City are back on the rise again after their recent downturn in the results, and I think could mean nothing will separate the two come full-time.

Reminder – we have a full weekend of games, our tips and previews section will be updated with additional previews from the televised UK games so be sure to keep checking back.