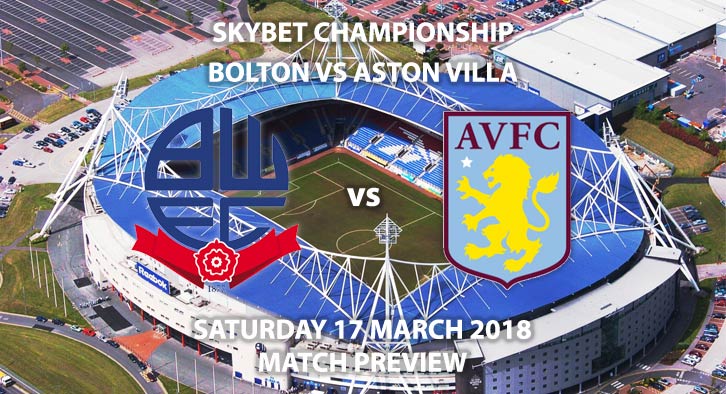 Bolton vs Aston Villa: Bolton host Aston Villa, looking for three points which could move them nine points clear of the relegation places.

Wanderers have lost just one of their last five games having secured a last-gasp draw at Sheffield Wednesday last time out. Aaron Wilbraham’s 93rd minute equaliser prevented another defeat on the road with Bolton having not won away this year. At home, it has been a different story. They have lost just two of their last 12 home games, picking up 26 points in that run. That form has dragged them out of the bottom three and up to 20th, six points clear of the drop zone.

With a six-point cushion, their future is in their own hands. They also have relegation rivals Birmingham, Barnsley and Burton still to play. Phil Parkinson has done a fantastic job at the Macron Stadium; first to get the club promoted but then to give them a fighting chance of survival. The club’s poor financial state has only made things tougher but they look on course for a second consecutive year in this division.

Aston Villa crashed to a disappointing 3-1 defeat to QPR in midweek. Rangers were only the second side to win at Villa Park this season. Steve Bruce’s side are seven points behind Cardiff in third place. With the two still to meet later in the campaign, Villa still have a chance of securing automatic promotion. Four straight wins and no defeats in five has really helped that push. Lewis Grabban’s recent form has been a major boost, with the Bournemouth loanee grabbing four goals in his last five games.

Aston Villa have won two of their last six games against Bolton. Their last win at the Macron came in 2011 when both teams were in the Premier League. Bolton’s have won three of the last six meetings, with one ending in a draw.

The referee for this game is Robert Jones. The Englishman has only officiated 11 Championships games this season but has an average booking points total of 44.1. He has shown four red cards in those 11 games, which is one of the highest ratios in the league.

Bolton are a good side. I was impressed with them when I saw them live last week. Sammy Ameobi is a big player for them and he will have to be at his best if they’re to get anything from this game. Aston Villa are in fantastic form and have experienced player who know how to earn promotion. Therefore, I am backing Aston Villa to nick this game. If it did end in a draw, however, I wouldn’t be surprised.

Bolton Wanderers vs Aston Villa will be televised live in the UK on Sky Sports Football with kick off at 17:30 GMT.