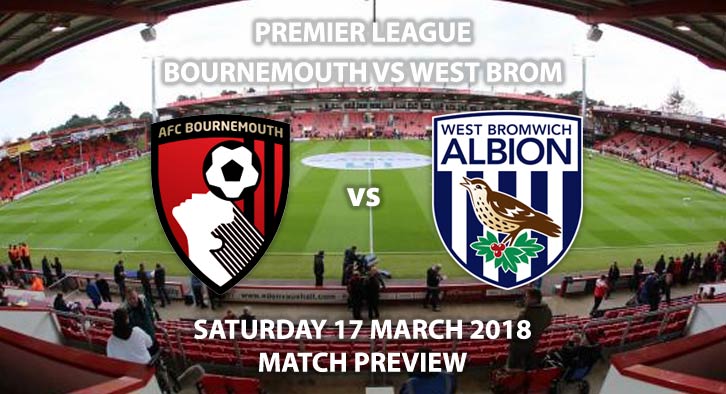 Bournemouth vs West Bromwich Albion – Bournemouth and West Brom meet this Saturday at the Vitality Stadium with the outcome likely to have huge consequences on the top-flight futures of both.

If Eddie Howe’s Dorset hosts pick up a first league win against the Midlands outfit in three attempts, it will take them to 36 points and the verge of ensuring a fourth successive year in the Premier League.

Simultaneously,  an 11th away defeat of the league campaign would send  West Brom to the brink of no return in the relegation battle.  The basement boys are already eight points adrift of safety with eight games remaining.

You can talk of miracles and where there is hope there is life, but that is exactly the problem with West Brom’s chances of another Great Escape. Under dead-manager-walking Alan Pardew all hope appeared to vanish last month, somewhere in a stolen Spanish taxi at 5am.

Prior to that warm-weather training break, the Baggies had won at Liverpool in the fourth round of the FA Cup to make it four games unbeaten in all competitions. They also had what seemed a decent set of league fixtures for the rest of February and into March.

But they have since lost seven in a row in all competitions – six in the league.

The last of those was a 4-1 home thrashing by Leicester, leading to Head Coach Pardew accusing his players of ‘unacceptable spirit and effort’  and then offering to discuss his position with the club’s owners. Bit late for that.

Bournemouth, currently 12th in the table,  suffered an identical  4-1 defeat at home 24 hours later, but the big difference was it came at the hands of high-flying Tottenham.

Despite that first loss in seven league outings on their own patch – a run which stretched back to December 17 and a 4-0 defeat to Liverpool – Cherries manager Howe was anything but downbeat with the performance of his side, who had taken the lead and threatened to runaway with the points before an impressive Spurs comeback.

In the reverse fixture at the Hawthorns, West Brom beat Bournemouth, 1-0, on the opening day of the season.

Expect goals:  There have been 29 in Bournemouth’s last seven leagues game at the Vitality Stadium and only one goalless draw there all season – v Leicester in September.

Bournemouth have kept two clean sheets at home this season. West Brom, meanwhile, have kept only two on their travels.

Expect a home win…come the final whistle. Even if West Brom go ahead in a match, it means little.  In 2017-18,  they have thrown away a league-high 21 points from winning positions.  If games lasted 45 minutes, would have won an extra 14 points.

Referee Graham Scott has shown 26 yellows in 15 games this season, an average of 1.9 per game. He has shown one red (none in last 14 games).

Bournemouth vs West Brom kicks off at 3pm – you can follow the progress on Sky Sports News.