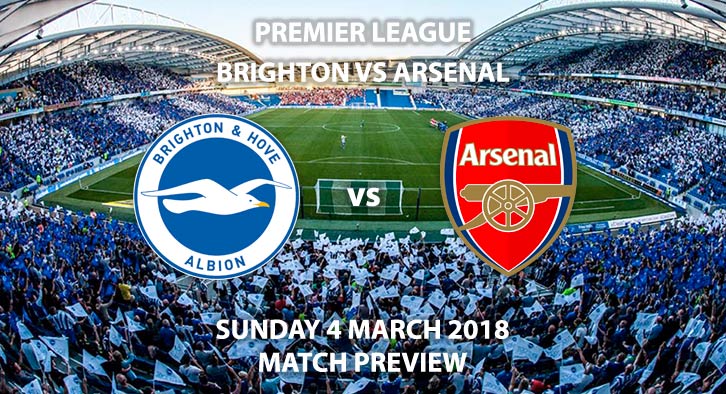 Brighton vs Arsenal – Arsenal will hope to bounce back from their Wembley defeat with a victory against relegation-threatened Brighton.

After back to back defeats to Manchester City, Arsenal will be hoping to end a wretched week with three points. Defeat at Wembley, followed by the Emirates saw the Gunners surrender their chance for silverware and to get back into the race for the top four. With the Europa League now their only hope of a trophy, it could be their best way to ensure Champions League football. With Arsenal ten points behind fourth-placed Spurs, their push for the top four seems over. However, like Manchester United did last year, they could still achieve Champions League football by winning the Europa League. They have been pitted against fellow European giants AC Milan, which means whoever comes out on top has a good chance of winning the competition.

Arsenal have lost their last three away league matches. Defeat to Bournemouth and Swansea gives Brighton cause for optimism ahead of this fixture. The Gunners are known for struggling against lower opposition. They haven’t won away in the league this year, with their last victory coming on the 28th December last year.

Brighton currently occupy 12th spot, four points above the relegation zone. No defeats in six has moved the Seagulls out of immediate danger, whilst they have won their last three home games in the process. Chris Hughton’s men are far from safe, however, these victories have been vital to renew belief around the Amex Stadium.

Glenn Murray has been in good form, netting six goals in five games. A brace for the former Bournemouth striker at the weekend took his tally to 12 for the season. New signing Jurgen Locadia opened his Premier League account for the club against Swansea, securing a good day all round for Brighton.

Arsenal have won the club’s last five meetings, including the reverse fixture this season. They have won at the Amex on their last two trips and haven’t been beaten by Brighton since 1982.

Kevin Friend will take charge of Sunday lunch-time’s game. Friend has the lowest average booking point total when compared to referee’s who have officiated 15 Premier League games this season(24). This includes 36 yellow cards and no red cards across 15 league games, therefore booking points may be worth avoiding.

I definitely think Brighton can take something from this game. Arsenal’s recent form on the road is poor, especially against teams who’re battling to stay up. Thus, Brighton are in good form and I think that could see them grab a draw on Sunday.

Brighton vs Arsenal will be televised live on Sky Sports in the UK with kick-off at 13:30 GMT.

More markets will be added later today prior to the game kicking off on Sunday afternoon. Keep visiting the tips and preview area for further updates and previews for this weekends fixtures.