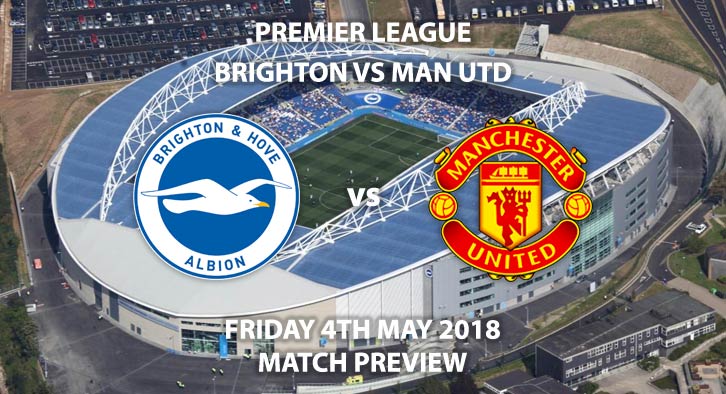 Friday night’s live game see’s Brighton vs Manchester United. United will be looking to secure second place as they visit the South Coast to play Brighton.

Jose Mourinho’s side have won their last three games in all competitions, including last week’s victory over Arsenal. Marouane Fellaini’s stoppage-time winner gave United all three points, moving them five points clear of third-placed Liverpool. Jurgen Klopp’s side have just two matches left to play, whilst United need one win from their remaining three fixtures to finish second. Whilst they have been in the shadows of their city rivals this season, United have still made progress. If they can win the FA Cup this will only further strengthen this argument. They can still end the season with 86 points, which would be enough to win the title most another season.

Brighton can secure their place in next season’s Premier League with another win. In truth, Chris Hughton’s men have probably already done enough to retain their top-flight status but another victory would ease any doubts. The Seagulls are seven games without a win, although they’ve lost just one of their last four games in all competitions. Their last home games saw them fight back to draw 1-1 with Tottenham, whilst Arsenal fell to defeat at the Amex last month. With United, City and Liverpool to come before the season’s end, trying to pick up another point or two could be crucial.

Craig Pawson is the referee for this Friday night fixture. The Englishman has an average booking 39.1, one of the highest in the division. With that in mind, I would advise a maximum booking points total of 30+ each team as I don’t see this being a bad-tempered affair.

Brighton have proven they are capable of getting a result at home. United, however, will want to end the season in style and I think they will edge this match.

Brighton vs Manchester United will be televised live in the UK on Sky Sports Main Event with kick off at 20:00 GMT.

Odds and markets last updated on 4th May 2018 @15:53 GMT. Markets will unlikely be updated ahead of kick off.

Keep visiting the tips and preview area for further updates and betting previews for more previews for this weekend’s FA Premier League and SkyBet Championship action.