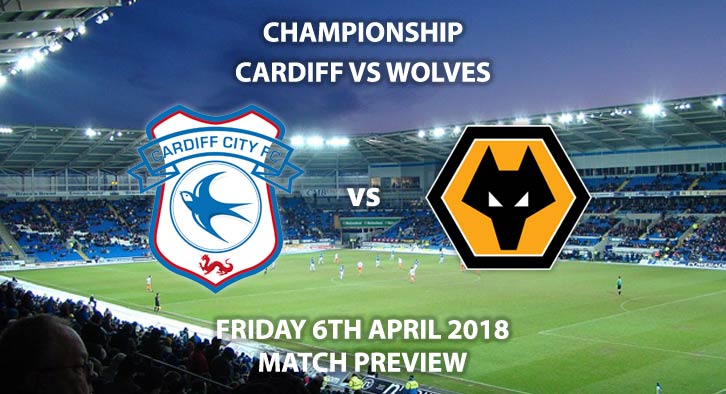 Cardiff City vs Wolverhampton Wanderers: Cardiff host Wolves at the Cardiff City Stadium in a match that could determine the destination of the league title.

Many have been pointing to this game for some time as the game that decides the Championship winners. Wolves have been runaway leaders for some time but Cardiff’s impressive form has given them a chance of stealing the title. The Bluebirds six five points behind Wolves, with a game in hand. A win for the Bluebirds on Friday and against Derby (their spare game) could see them move level on points at the top. Whilst that would still be not enough to take them top, due to Wolves superior goal difference, it would certainly crank up the pressure on Nuno Santo’s side.

Cardiff come into this game in their best form of the campaign. Despite surrendering their eight-game winning run at Sheffield United on Monday, they did secure a late point thanks to Anthony Pilkington. Neil Warnock’s side were second best at Bramall Lane yet didn’t lose the game; a hallmark of a good side. They’re five points clear of Fulham in the race for automatic promotion and have played one less game than Slavika Jokanovic’s side. Cardiff have won their last seven home games, with their last league defeat at homecoming in late December. Cardiff conceded just four goals in those seven wins, collecting four clean sheets in the process.

Wolves welcome back Matt Doherty and Ruben Neves from suspension after both missed the midweek draw with Hull. When Wolves are without Neves, they don’t look the same team. The Portuguese’s influence on this team hasn’t gone unnoticed, having been nominated for the Championship player of the season. A win for them would all but secure the league title and move them one step closer to the Premier League. Wolves are unbeaten in their last four games but have only won two of their last five away games. They did put out a magnificent display last time on the road, beating promotion-chasing Middlesbrough despite finishing the game with nine men.

Mike Dean has been placed in charge of Friday’s top table clash. The Englishman is yet to officiate a game in the second tier this season. Dean has an average booking points total of 39 across 21 matches. This is the fifth highest in the division, therefore booking points could be a good bet for this game.

This is a tough game to call. On one side, Cardiff’s home form has been fantastic. Wolves, however, are the best team in the league and their quality could shine through. Thus, I’m going to sit on the fence and opt for a draw, with both sides capable of securing the three points.

Cardiff City vs Wolverhampton Wanderers will be televised live in the UK on Sky Sports Football with kick off at 19:45 GMT.