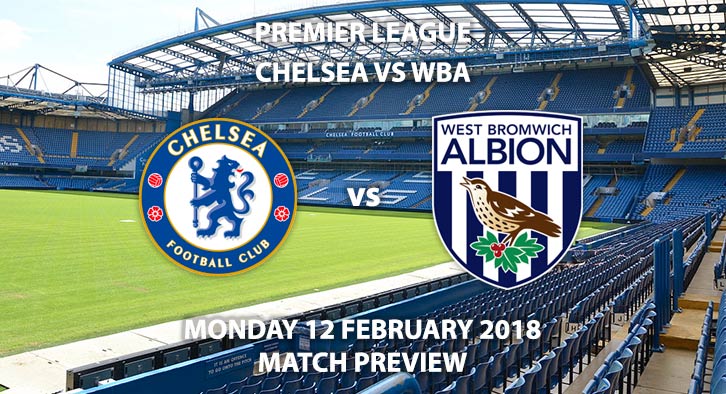 Chelsea vs West Brom – After back to back defeats Chelsea will be hoping to return to winning ways against West Brom as the race for the top four heats up.

After dropping six points against lower placed opposition, the pressure has cranked up on Antonio Conte. With many already speculation the former Juventus boss will leave at the end of the season, now was not the right time for his team to have a mid-season wobble. With a crucial Champions League tie against Barcelona to come, Conte’s men are in exactly the wrong form to face the former European Champions.

Their 4-1 defeat against Watford was extremely worrying as the Champions shipped three goals in just seven minutes. The Hornets were by far the better team across the 90 minutes, even before Tiemoue Bakayoko’s first-half red card. A run of just two wins in ten games has seen the Champions fall to fourth in the league and they now sit just one point above fifth-placed Tottenham.

Conte needs to try and re-create the atmosphere that saw them run away with the league last year in a bid to try and secure a minimum of a top-four place. With the FA Cup and Champions League still on offer, Chelsea’s season is far from over. With two lots of silverware still available, an upturn in form is critical before they fall behind in the top four race.

West Brom need wins; it’s as simple as that. Despite a recent upturn in performances, they still sit 20th, four points adrift at the bottom of the league. With Swansea and Stoke’s recent upturn in results, it has piled more pressure on the Baggies, who have won just one Premier League game since August.

The loan signing of Daniel Sturridge should help their cause, with goas in short supply for Alan Pardew’s men. With the World Cup coming up, Sturridge needs a strong second half of the season to have any hopes of forcing his way into Gareth Southgate’s 23 man squad. With Kane, Vardy and Rashford all guaranteed a spot there could be room for one more striker and if Sturridge can re-discover his form from previous years he could find himself on the plane.

Chelsea have won four of their last five games against the Baggies. They haven’t lost at home since 1983, a record stretching nearly 35 years. Lee Mason has been appointed as the referee for Monday night’s clash. In his 12 games in charge, Mason has produced 27 yellow cars, averaging at 2.2 per game. Having shown two three red cards, in addition, this campaign, his average booking points total stands at 25.8, which is one of the lowest amongst the officials.

After a run of four games without defeat, back to back losses have left West Brom in the mire. Draws are no longer good enough, they need results and they need them quick I struggle to see them getting anything from this one. Although Chelsea have been poor, I can see Conte going back to what he knows best and getting a huge win.

Chelsea vs West Brom will be shown live on Sky Sports at 8PM tonight in the UK.

The UEFA Champions League starts back this week – don’t forget to check out our tips and previews area. We will have match previews for both Spurs and Liverpool games this week as well as Arsenal’s Europa cup game.