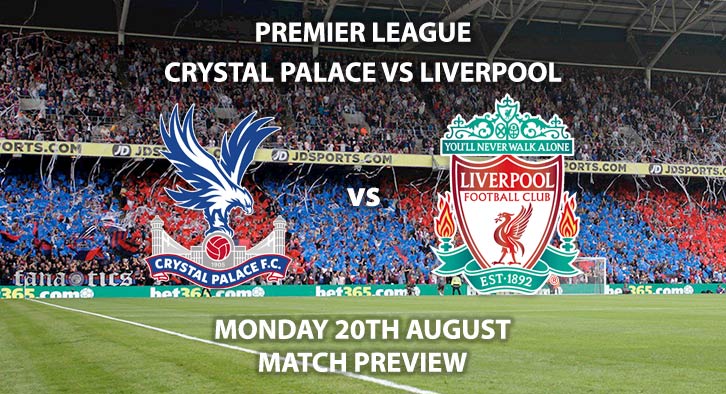 Crystal Palace vs Liverpool is this Monday’s nights televised games in the Premier League.

Roy Hodgson’s Palace side saw off Premier League newcomers Fulham on the opening day in a 2-0 victory. Goals came from Wilfried Zaha and Jeffery Schlupp. Meanwhile, Liverpool picked up from where they left off last season. A 4-0 victory and Mo Salah opening his 2018/19 account came as a shock to no one.

The hosts are priced at 11/2 to cause an upset at Selhurst Park. Although they did start very positively against Fulham; Jurgen Klopp’s Liverpool is a different kettle of fish. Natural winger Wilfried Zaha took up a much more central role which allowed him more space to create dangerous attacks for Palace. He is priced at 17/2 to score first – great punt for any risktakers. Andros Townsend and Jeffery Schlupp are both dangermen on the wings and new signing Jordan Ayew could feature. A player who showed his attacking potential last season with Swansea City.

The visitors are clear favourites for this match as they will be hoping to send out a statement of intent regarding a title push this season. SkyBet have priced them at 4/9 to make it two wins from two. It’s hard to pick out a weak area from Liverpool’s squad, with old and new faces seamlessly working perfectly together as they dispatched of West Ham on opening day. Sadio Mane continued his opening day antics with a brace, whilst goal machine Mo Salah grabbed the opener and Daniel Sturridge made it four at the death. Naby Keita looked comfortable in the middle of the park and James Milner only seems to be getting younger. This squad will be feared by opposition all season. Liverpool are priced at 11/8 to score three or more goals – a feat you could not argue against.

The referee for this match will be Michael Oliver. Oliver was in charge at Anfield last weekend, where he brandished four cards.

Crystal Palace will have their work cut out against Liverpool, who are becoming defensively stronger. The front three should run riot and make it an easy three points.

Crystal Palace vs Liverpool will be televised live in the UK on Sky Sports Football with kick-off at 20:00 GMT.

Outside of the NAP and Next Best (NB) pick – we would suggest covering a maximum of 3 of the listed RABs unless your budget allows you to do so otherwise. Good luck tonight.

Odds and markets last updated on Monday 20th August 2018 @18:57 GMT. Keep checking back to see if there’s any updates to markets – the time stamp in the previous sentence for when we update tips on this page will be updated.