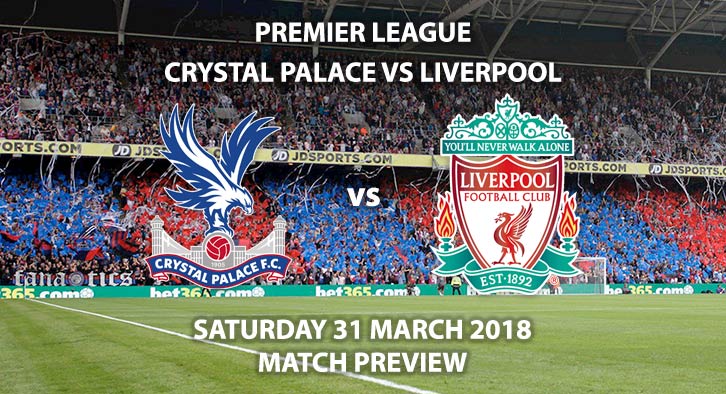 Crystal Palace vs Liverpool – The international break is over and the Premier League gets back underway as Liverpool travel to Crystal Palace with both sides needing victory in opposing sides of the table.

Barring the defeat against rivals Manchester United, Liverpool were in scintillating form prior to the international break.

Jurgen Klopp’s side have won ten of their last 14 in the Premier League by simply blowing the opposition away. Only Manchester City have scored two or more in more games (24) than The Reds (20) this season.

Much of that has been down to the form of Mo Salah, highlighted with the four-goal haul against Watford. The Egyptian King, as he’s affectionately known by the Liverpool faithful, has destroyed the league upon his return to England.

Remarkably, he already has 28 Premier League goals, with seven games of the season still left to play. The record in a 38-game season is 31 (held by Cristiano Ronaldo, Alan Shearer and Luis Suarez). That feat, alongside the seemingly sewn up Golden Boot, is well within his laser-like sights.

Salah, and Liverpool, require nothing but victory as the battle for a Champions League spot nears its closing stages. In 3rd, The Reds have 63 points, with two points separating both Manchester United in 2nd, and Tottenham Hotspur in 4th. Most importantly, however, they are seven clear of Chelsea, although having played a game more.

Palace have scuppered Liverpool’s hopes on more than one occasion. Most notably, ‘Crystanbul’, where Liverpool blew a three-goal lead and drew when chasing their maiden Premier League title in 2013/14.

In fact, The Eagles have only lost to Liverpool in three of their last eight league meetings, winning four. That is a great record given the comparative size of the two clubs in question and will surely inspire hope.

Hope is exactly what is needed for what is shaping up to be an almighty relegation scrap. Palace ended their horrible seven-match winless run last time out, beating fellow strugglers Huddersfield Town 2-0 in a crucial game.

Now, there are just seven points between Brighton (34) in 12th and Stoke (27) in 19th. Palace are somewhere in the middle, in 16th with 30 points on the board, hovering ominously over the drop-zone.

The man in the middle will be Neil Swarbrick for this televised match. The stats say that there shouldn’t be too much action in this one. Palace are yet to receive a red card, and no side averages fewer booking points per game than Liverpool (12.7).

Swarbrick himself dishes out a very low (16th out of 19) average of 25.9 booking points per match. In fact, he also hasn’t given anyone their marching orders this term.

Roy Hodgson will need a trademark defensive display to get anything out of this game. Something that hasn’t really appeared in his Crystal Palace team this season. They have only kept six clean sheets all season – just Stoke and Bournemouth have less (5). Against the overwhelming trio of Sadio Mane, Roberto Firmino and the aforementioned Salah, that doesn’t look like changing anytime soon.

Crystal Palace vs Liverpool will be televised live in the UK from 12:30 PM GMT on Sky Sports Football HD.