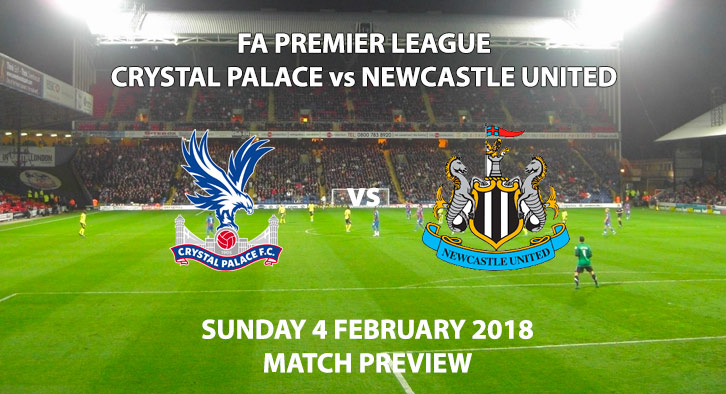 Sunday afternoon’s early kick off comes from Selhurst Park which see Crystal Palace vs Newcastle United. Palace host Newcastle in a crunch fixture at the bottom of the Premier League. A win for either side could move them into the top half of the table.

After a run of one defeat in four league games, Palace will be looking to further distance themselves from the bottom three. Roy Hodgson’s side sit in 12th spot, three points above the relegation zone. With games against three of the top four to come, it’s vital that Palace pick up some results against the teams around them.  Having already beaten Southampton and securing a draw against West Ham in recent weeks, another victory against the Toon Army would be greatly received. After missing out on Diafra Sakho, Palace appears to have turned their attention to Preston striker Jordan Hugill. Despite being out of contract in the summer, it could take a reported ten million pound bid to prise away the Lancashire club’s top scorer, which is a lot of money for someone who’s unproven in the Premier League.

Newcastle come into this game having lost their last two games. In the league, however, they have suffered just two defeats in six. With the club still up for sale and no closer to being sold, Newcastle have again failed to invest in their squad during the transfer window, much to Rafa Benitez’s frustration.

To me, it appears that if the club doesn’t get sold or Mike Ashley doesn’t help to bolster the squad, they risk losing Benitez and possibly their Premier League status as well. The lack of depth in the squad is a major issue and whilst they have improved of late, the team are desperately crying out for offensive reinforcements. With 22 goals in 24 games they are amongst the lowest scorers in the league and with them sat just one point above the drop zone they need some more firepower.

Newcastle have lost just one of their last 14 games against Crystal Palace and secured a 1-0 victory in the reverse fixture this season. Their last two games have finished by that same scoreline, however, they did lose 5-1 on their last visit to Selhurst Park, their only loss in that impressive run.

Similarly, they haven’t won away in the league at Palace since 2013, despite that solitary defeat. Andre Marriner has been selected as the referee for this match, fresh from officiating Tottenham’s game against Manchester United in midweek. Marriner has a booking points average of 28.8, which low compared to other officials.

Given their recent form against relegation rivals, I think Palace will win this game. Selhurst Park has become a tough place to go and Newcastle don’t travel well as it is.

Crystal Palace vs Newcastle will be televised in the UK on Sky Sports from 1:30PM GMT.

Today’s game between Tottenham vs Liverpool will be up later in our tips and preview section as well as Monday night’s match featuring Watford and Chelsea.