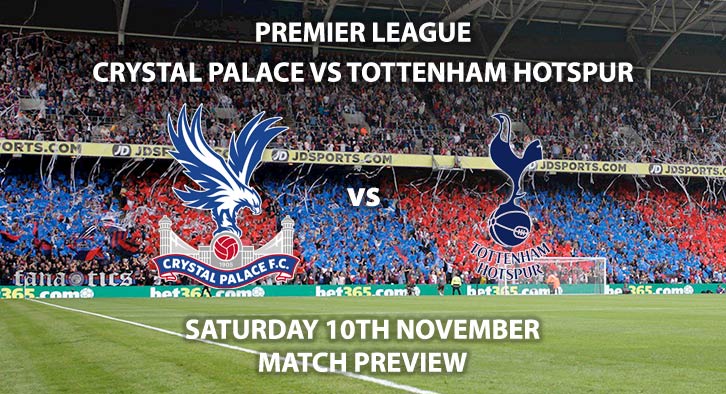 Crystal Palace vs Tottenham Hotspur – the visitors will be hoping to build on their midweek with over PSV with another three points in the Premier League when they travel to Crystal Palace.

Spurs secured a vital three points in the Champions League on Tuesday night, coming from a goal behind to beat PSV 2-1. Harry Kane’s brace ensured Mauricio Pochettino’s men stayed in the competition, as anything but a win would have seen them eliminated. In the Premier League, Spurs secured a hard-fought 3-2 win against Wolves last weekend, with Eric Lamela, Lucas Moura and Kane sealing all three points. That win keeps them in fourth place, just three points behind Liverpool and Chelsea.

Tottenham face Chelsea, Inter Milan and Arsenal all in the space of a week after this match, so it’s vital they get all three points on Saturday ahead of such a tough run of games. Winning games like this are the difference between a top four side, and those challenging for the Premier League. If Tottenham want to reach that level, these are the tricky games they need to find a way to win.

Palace are without a win in six matches in all competitions. They lost 3-1 at Stamford Bridge last week, having picked up a point against Arsenal the week before. They host Tottenham on Saturday and then face Manchester United to compound a tough run of fixtures for the Eagles. Palace’s future will not be dictated in games against the big six, however. It’s games against sides in and around them which will determine whether they will be in mid-table obscurity or a genuine relegation battle. Palace’s main concern, as it has been for some time, is their lack of goals. They’ve scored just three times in their last five games; making them the league’s third-lowest scorers with eight.

Jonathan Moss is the referee for Saturday’s tea-time game. The Englishman has officiated eight top-flight games this season, accumulating an average booking points total of 40.6. As a result, I would advise a maximum of 60+ total points for this fixture.

Palace showed their grit and determination against Arsenal a fortnight ago, which Spurs will be wary of. However, both of their goals came from the penalty spot, which I think will again be their undoing. Therefore, I’m backing Tottenham to edge it.

Where to watch the game: Crystal Palace vs Tottenham Hotspur will be televised live in the UK on BT Sport 1 with kick-off at 17:30 GMT.