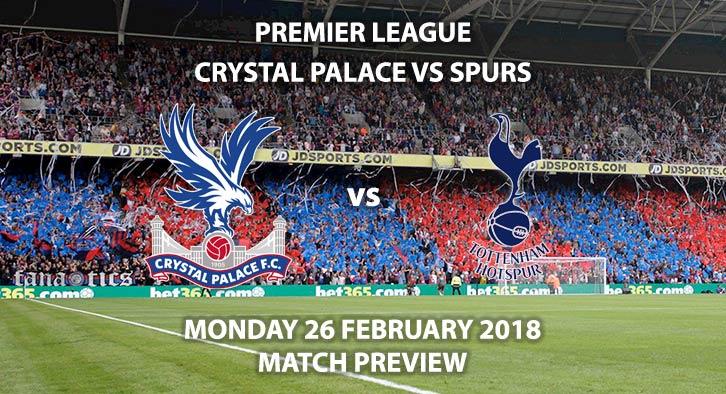 Crystal Palace vs Tottenham Hotspur – Crystal Palace host Tottenham’s Hotspur on Sunday in Premier League action. The two clubs are fairing rather differently this season; the hosts are in the midst of a huge relegation scrap whilst the visitors have their eyes set on the top four.

Crystal Palace are currently 15th in the Premier League having accumulated 27 points from 27 matches. Roy Hodgson has turned Crystal Palace around in very impressive fashion however recently things have gone rather stale. The club is very reliant on their few star players such as Wilfried Zaha and Luka Milivojevic.

Without their key men, Palace would be deep in the relegation zone, if their recent poor form wasn’t already enough to worry the fans. Palace have scored two or more goals in 33% of their Premier League matches this season which means they have often been in tight encounters. Their speed on the counter attack is probably their most dangerous asset, which has led to them being awarded an average of 5.9 corners this season in the Premier League.

Their visitors have also faired well on the corner betting markets this season, having averaged 6.7 corners per match this season in the league. Spurs are currently fifth in the league standings, with 52 points from 27 games. Mauricio Pochettino will be happy with Tottenham’s season as they have made a good account of themselves on the European stage. Their recent comeback from a two goal deficit over in Turin was a very impressive feat.

Talisman Harry Kane has been – yet again – the catalyst to Spurs recent success. The Englishman has spearheaded a spurs attack that has scored two or more goals in 48% of their league matches. He has also grabbed 23 goals with 1 assist; leading the race for the golden boot.

Crystal Palace vs Tottenham Hotspur will be televised on Sky Sports Football HD and will kick off at 12:00 on Sunday 25th February.

More markets will be added over the weekend prior to the game kicking off on Sunday. Keep visiting the tips and preview area for further updates and betting previews for this weekend’s fixtures.