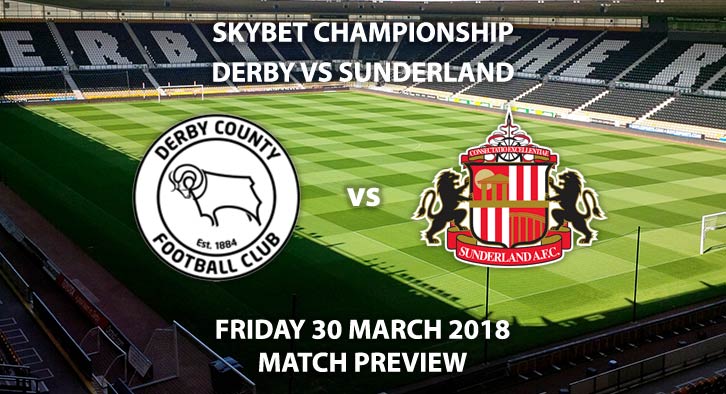 Derby County vs Sunderland – a tale of two sides desperate for a win by any means.

At opposite ends of the table, something has to got to give between two of the division’s out-of-sorts teams. Derby’s winless run is seven games, but even that is topped by Sunderland’s winless streak of ten matches.

The Rams have suffered their infamous promotion-chasing wobble and have dropped to 5th in the table. Consequentially, Gary Rowett’s side are now 14 points adrift of the equally resurgent Cardiff City in the automatic promotion places.

The spark of play-off contention has completely ignited in recent weeks. Almost unthinkably, there are just four points between Millwall (58) in 10th and Derby (62) in 5th. Sheffield United, Preston North End, Bristol City and Middlesbrough are the teams bridging the gap, all with a real shot.

Reclaiming momentum and consolidating a play-off spot is essential, failure to do so would be catastrophic from Derby’s early-season position. Playing the division’s bottom side, who are in even worse form, is the perfect opportunity to do so.

However, something that is almost unheard of for Sunderland in recent times, they have a wonderful record against Derby County. The Black Cats haven’t lost against The Rams since 2001, an undefeated run stretching 11 matches.

The last of which was the first game of this campaign, a 1-1 draw at The Stadium of Light. Things were vastly different then. Now, the North-East side are teetering on the brink of consecutive relegations and dropping into the third tier.

Chris Coleman’s appointment was meant to inspire a change in fortunes, but instead, despair has just crept nearer. A far cry from the very recent days of beating teams like Manchester United and Chelsea in the Premier League.

Sunderland will have to defy the odds. Not only get out of this predicament, but to get anything from this game. Coleman’s side have only kept five clean sheets this season, the joint-lowest in the league. Conversely, Derby’s 17 is only bettered by table-toppers Wolverhampton Wanderers.

James Linington will be in charge this time out. The Englishman has given 83 yellow cards and one red card in his 24 Championship games this season. He may be busier than usual considering Sunderland’s disciplinary record, The Black Cats have received a league-high six red cards this year.

With the match likely to be tense and both teams desperate not to lose, the best thing to say for either side is that it couldn’t be a better time to play the other one.