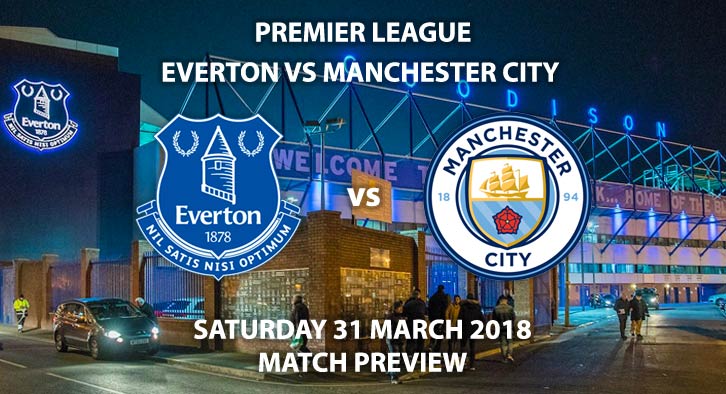 Both clubs are needing a win from this fixture, but for different purposes. The hosts are looking to catch up to Leicester and Burnley who are narrowly above them in the league whilst Manchester City are looking to increase the 16-point gap at the top and become one game closer to lifting the Premier League trophy.

Everton are currently ninth in the Premier League table. They have three wins in their last five outings, with their most recent victories over Stoke and Brighton illustrating their talent as they averaged 58% possession over the two matches. This season their form in front of goal has been much better at Goodison Park than on the road. They have averaged two or more goals in 60% of their home league matches, however City have conceded 20 goals all season. Will be a big test for Allardyce’s attack.

Defensively, Everton have been rather suspect at times. They have managed to keep a clean sheet in only 22% of their league matches. They have leaked goals at times, with 50 goals going against them in their 31 Premier League matches. Long odds for this Everton team, however they have proved to be tough to beat at home.

The visitors are currently first in the Premier League standings and can almost feel their fingers on the trophy. They are 16 points ahead of second placed Manchester United with eight games to play. Their dominance this season has been primarily down to their clinical attack. Pep Guardiola’s side have scored two or more goals in 80% of their league matches and have managed 85 goals in their 30 matches so far. Winger Leroy Sane has continued to impress and showcase his composure in front of goal in recent months. The German international should cause havoc this weekend.

Defensively, Guardiola’s men have been the best in the league. They have conceded only 20 goals all season and kept a clean sheet in 50% of their matches. The defensive muscle they possess is something to behold. Easy favourites for this fixture and you’d be a brave better to go against them.

Everton vs Manchester City will be televised live on BT Sport 1 in the UK and will kick off at 17:30 GMT.