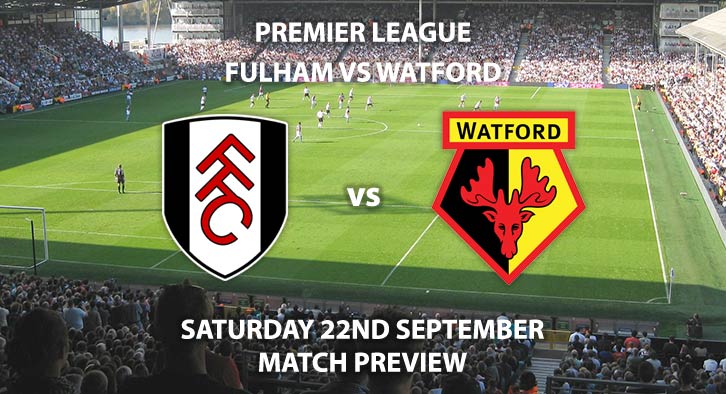 Fulham vs Watford: Fulham host Watford in a London derby, with both sides looking to bounce back from defeats last weekend.

Fulham come into this game having been beaten 3-0 last time out against Manchester City. That result left the Cottagers in 15th place, with four points from their opening five matches. It’s been a relatively solid return to the top flight, although it is obvious that their home form will be key in their survival. Having splashed the cash in the summer, many have tipped Fulham to do well this year. Alexander Mitrovic has continued his form from last year with four goals in their opening five games.

The Serbian will be their main supply of goals for the campaign, having completed his permanent move from Newcastle in the summer. Defensively, Fulham still have plenty to learn. They’ve conceded 12 goals already, which is the highest in the division. Whilst they often can out-score their opposition, they will need to tighten up at the back in order to secure a second year at this level.

Watford lost their 100% start to the campaign last Saturday, losing 2-1 to Manchester United. The Hornets were unable to complete their comeback after Andre Gray reduced their two-goal deficit. Still, it’s been a fine start for Javi Garcia’s men, who were tipped to struggle by many before a ball was kicked. They currently occupy fourth spot, just three points off the top. Much of their fine start has been down to their new system, which allows Gray and Troy Deeney to play together. With a more narrow midfield, the pair are enjoying their time as a partnership which has culminated in four goals between them.

Martin Atkinson is the referee for this game. The Englishman has an average booking points total of 36 across five league games this season. He is the only referee to have officiated that number of games this season, proving he is one of the best in the eyes of the FA. Therefore, I would advise a maximum of 50+ total booking points for this fixture.

Watford have started the season in fantastic form, securing results both home and away. Fulham leak goals, but are very entertaining to watch and are a tough match for anyone at Craven Cottage. As a result, I’m going to plump for a draw, but I’d expect there to be goals in this game.

Fulham vs Watford will be televised live in the UK on Sky Sports Premier League with kick-off at 12:30 GMT.