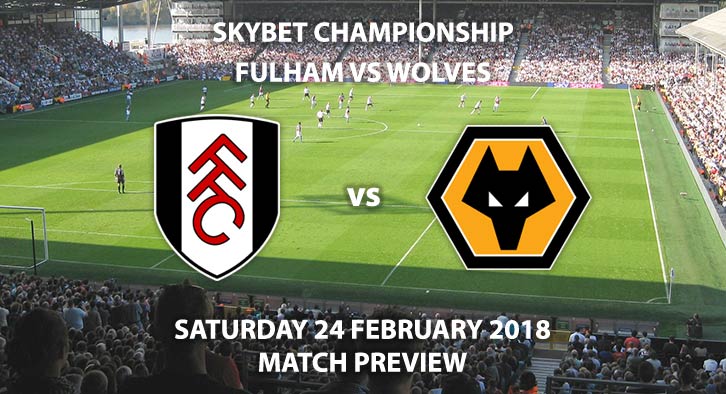 In Championship terms, it is the immovable object versus the unstoppable force here. Fulham are undefeated in their last eight home games, and ten in total. Wolves are also unbeaten in their previous nine away matches, so excitingly, something has got to give.

After a late surge at the end of last season, Slavisa Jokanovic’s side forced their way into the play-off positions. This year has been similar, as Fulham are one of the form sides in the league heading into the run-in.

The form of players such as teenage sensation Ryan Sessengnon has been key. The 17-year-old (yes 17) has scored 12 league goals and consistently produced quality down the left-hand side. Aleksandar Mitrovic getting off the mark in the 1-1 draw with Bristol City last time out will be pleasing too. The Serbian international – on loan from Newcastle – could be a real asset up front if he finds his form.

Wolves have been runaway leaders in the Championship for most of the season and seem destined for the Premier League. Their signings, including manager Nuno Santo Esprito, have just had too much quality and blown the opposition away.

Despite drawing their last two games, Wolves are still nine points clear with the end of the road coming closer. There are now just 13 matches left for the 13-point gap between themselves and third place (Villa) to be breached.

Seemingly like a foregone conclusion, now we can start enjoying the prospect of players such as Ruben Neves and Ivan Cavaleiro in the Premier League. One can be sure they will spend even more money to attempt to not just survive but thrive.

This fixture sees the two best attacking sides in the league go head-to-head. Wolves have (surprisingly) scored the most with 59, but Fulham have just four less (55) themselves. In fact, Wolves have scored 2+ in 18/33 games, with The Cottagers once again just four behind on that count.

What makes Wolves a superior side on top of their fearsome attack, is their defensive capabilities. No Championship team has more than the 18 clean sheets secured by Nuno’s side this year. By comparison, Fulham, despite their lofty league position, only have more league clean sheets than eight sides, with eight.

Craven Cottage will surely be rapturous in what is a fantastic opportunity for Fulham to showcase their promotion credentials. Cardiff have taken a foothold with recent form but the race for second place is still very much alive. Jokanovic’s side are eight points adrift of The Bluebirds so a victory here is vital to not lose touch.

Peter Bankes has been chosen to take charge of this vital match. The Englishman has given 70 yellow cards and two reds in his 20 Championship matches so far this term. This results in Bankes dishing out 41.8 average booking points per game.
However, both Fulham and Wolves haven’t drawn too much action from referees this season. The two clubs are 15th and 20th (18.9 and 16.9 respectively) in terms of average booking points received per game.

Surely this means the real action will be happening on the pitch and what a fire-cracker of a game is in store for Saturday evening. One that means so much to the top of the Championship in the race for the Premier League.

Fulham’s home form will help them capitalise on recent stutters by Wolves and be enough to claim a huge win.

More markets will be added over the weekend prior to the game kicking off tomorrow. Keep visiting the tips and preview area for further updates and betting previews for this weekend’s fixtures.