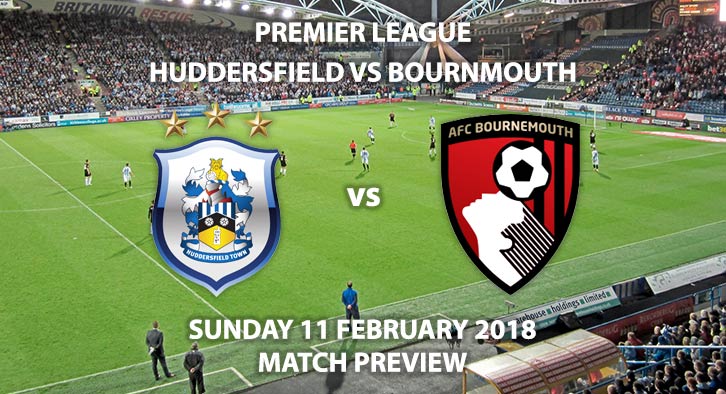 Huddersfield vs Bournemouth Preview, Sunday 11th February, 12:00pm. Two sides striding in opposite directions of the league meet at the John Smith’s Stadium as Huddersfield desperately try to stop the rot against Bournemouth.

After a fantastic start to life in the Premier League, the wheels seem to have come off The Terriers’ season – and whilst two victories against Championship sides in FA Cup (Bolton Wanderers and Birmingham City) have seen them into the fifth round, three points in the Premier League has evaded them since December 16th. Consequentially the dreaded relegation zone has been entered, and Huddersfield are now 19th.

That makes it nine games without a win, but even more worryingly Wagner’s side have lost the last five on the spin and only scored one goal in their last six league fixtures. This slump has coincided with competitor teams’ upturn in form – West Ham have only lost of their last seven, Brighton and Southampton won their last game, and Swansea have seen a remarkable turnaround since appointing Carlos Carvalhal. Something needs to change and with the division so tight in the bottom half, a decent run of results can make all the difference and a game in front of a passionate home crowd against Bournemouth could be the perfect catalyst.

Bournemouth too have perhaps enjoyed the greatest turnaround of recent weeks. After a wretched run from the end of November into late December that saw no victory in eight league games, The Cherries are unbeaten since Boxing Day.
Four wins have come in that time, against Everton, Arsenal, a sublime 3-0 victory at Stamford Bridge against Chelsea, and a 2-1 comeback win against Stoke last time out.

Remarkably, Bournemouth are now 9th – where they finished last season – and the consensus is now that Eddie Howe’s side are looking up the table rather than down.

Michael Oliver is officiating this one – no one has overseen more than his 21 Premier League games this year. He comes in at 7th out of 19 referees for average booking points given per game with 39.0 – or 3.4 yellow cards and 0.2 red cards per game.

Only Watford have received more than the 3 red cards given to Huddersfield this term, alongside their 42 yellow cards put them 5th in the league for average booking points received per game with 19.0 – so the smart money would be on them to continue their poor disciplinary record.

Whilst goals have been no issue whatsoever for Eddie Howe’s men – they have scored two or more in seven of their last eight league games – with only five clean sheets only Stoke have recorded less (4) this campaign. Huddersfield in comparison have got seven but are the lowest scorers in the league (tied with Swansea) with just 19 goals – and have failed to score in five of their last seven Premier League matches. Mainly due to the generally poor defences, both teams to score seems a reasonable bet.

The money would say to back Bournemouth in terms of corners, 140 corner-kicks place The Cherries with the league’s 8th highest total. Huddersfield, in relation to their league position have received a fair amount too though, they come in at 13th with 116.

Bournemouth have been scoring goals for fun recently and their attacking options will eventually overpower a depleted Huddersfield.