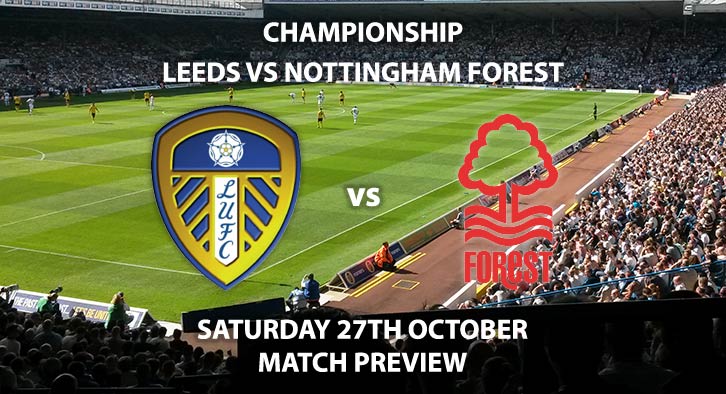 Marco Bielsa’s side bounced back from their 2-1 defeat to Blackburn Rovers with 2-0 win over Ipswich Town in midweek. Goals from the returning Kemar Roofe and Liam Cooper sealed a crucial three points. Roofe returned to the side against Blackburn after six weeks out through injury. In that time, Leeds won just twice in nine matches, in all competitions. Like Roofe, Pablo Hernandez has also made his timely return from injury. The Spaniard is crucial to how Bielsa sets up his side, adding much-needed creativity to attacks. With Patrick Bamford also missing, Leeds have lacked a physical presence up front. Tyler Roberts has impressed, but at the tender age of 19, he is still adapting to life in the Championship. Their win in midweek lifted them to the top of the table, although they are level on points with Middlesbrough and Sheffield United.

Nottingham Forest are seventh, two points outside the top six. They bounced back from a 2-1 defeat against Norwich at the weekend with a 2-0 win at Bolton in midweek. Joe Lolley and Lewis Grabban were again on the scoresheet, having impressed in recent weeks. Forest have scored two or more goals in five of their six games, which highlights their eye for goal. Defensively, they are also solid, having kept four clean sheets in their last eight league games. With the league so tight, a run of two or three results can swing a team’s season. Forest have won four of their last seven, which has seen them shoot up the table, as a result.

Geoff Eltringham is the referee for this game. The Englishman has officiated eight games in the second tier, accumulating an average booking points total of 33.1. With that in mind, I would recommend a maximum of 50+ points for this game.

Leeds will be heavily boosted by the return of Roofe and Hernandez, although they are facing an in-form Nottingham Forest side. I think Leeds will edge this game, but I’d expect goals.

Leeds United vs Nottingham Forest will be televised live in the UK on Sky Sports Football with kick off at 17:30 GMT.

Odds and markets last updated on Saturday 27th October @10:00 GMT. Keep checking back to see if there’s any updates to markets – the time stamp in the previous sentence for when we update tips on this page will be updated.