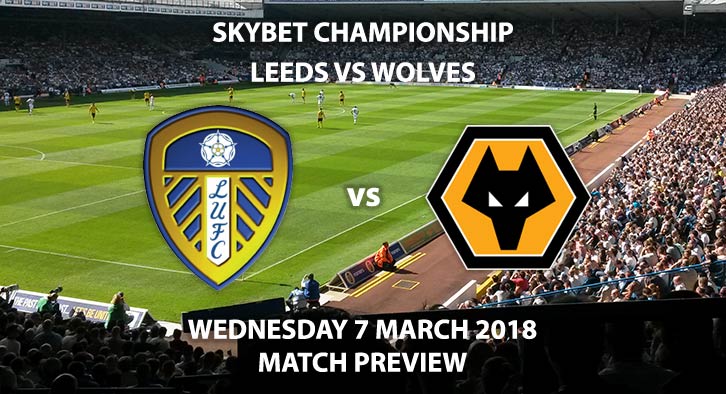 The visitors will be hoping their recent postponed match against Reading will not affect their performance, however it has handed a big boost to the hosts as Ruben Neves will now have to serve his suspension on Wednesday instead.

Leeds United are currently 12th in the Championship standings and their dreams of the play-offs are slowly drifting away. Their last outing handed a huge blow to their chances as they lost 3-0 to Middlesbrough who are now only two points from a play-off place as things begin to heat up. Paul Heckingbottom’s men have found goals rather hard to come by this season as they have only managed two or more goals in 35% of their home matches. German striker, Pierre-Michel Lassoga, is leading by example with 10 goals and three assists.

It hasn’t been an ideal campaign for the northern outfit who have struggled to say the least against the top sides. Their recent form makes for grim reading with one win in their last 12 in all competitions. They have kept a clean sheet in 37% of their matches but have conceded two or more goals in only 35% of their home fixtures. Wolves will find it challenging to break down their defence.

The visitors are currently first in the Championship with many tipping them to hold their position for the rest of the season. For most of the campaign, Wolves have been a joy to watch and have illustrated the sheer quality and class that has seen them deservedly hold the top spot. Players such as Leo Bonatini and Ruben Neves, who is unavailable on Wednesday, are just a couple of the stars in Nuno Espirito Santo’s squad.

Incredibly despite all of their dominance this season, Wolves have only managed to score two or more goals in 29% of their league matches. However, they have kept a clean sheet in 50% of their matches and only conceded an impressive 28 goals from 34 matches. Their recent form would suggest they have not won the title quite yet however they are still the dominant force in the second division and Leeds will have a tough time dealing with their potent attack.

Both teams have differed slightly regarding their discipline this season as the hosts have averaged a total of 23.1 booking points whilst their visitors, only 17.4. Tim Robinson will take charge of this match. The official has awarded an average of 39.8 booking points in his 25 Championship matches.

Leeds United vs Wolves will be televised on Sky Sports Football and will kick off at 19:45.