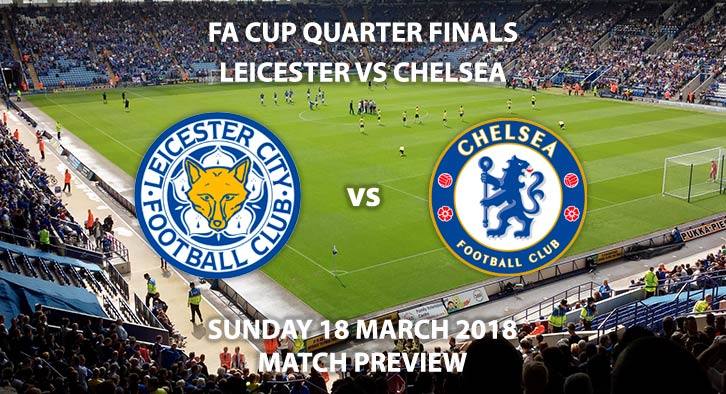 Leicester vs Chelsea: Chelsea travel to Leicester in the FA Cup looking to bounce back from their midweek defeat to Barcelona.

Chelsea’s defeat at the Nou Camp ended their hopes of a second ever Champions League title. The FA Cup is now their only hope for silverware. With the race for the top four hotting up, it’s crucial that they don’t slip up. They returned to winning ways in the league with a comfortable victory over Crystal Palace last weekend. Willian continued his fine form in front of goal by opening the scoring at Stamford Bridge. The Brazilian has scored five goals in his last five games. He has also opened the scoring in all five of those games, showing he is good value for first goalscorer.

Chelsea have lost their last four away games. If Antonio Conte’s men want to finish in the top four they need to address their poor form on the road. The Italian needs to make the Champions harder to beat; a task he excelled at last year on the way to the title. They are only four points adrift off fourth place and if they can rediscover some form I still fancy them to secure a Champions League spot come the end of the campaign.

After a poor run of results, Leicester returned to winning ways at the weekend in emphatic style. The Foxes secured a 4-1 at West Brom, which was in no part thanks to Jamie Vardy’s spectacular equaliser. From there on Claude Puel’s side dominated the game and took home all three points. With Vardy and Riyad Mahrez in the side, Leicester will always cause problems. The two linked up again superbly at the weekend, a theme that Leicester fans have come accustomed to seeing.

Craig Pawson is the referee for this game, fresh from officiating Manchester United vs Liverpool last week. The Englishman has the highest average booking points total in the league. He has issued 33 yellow cards and four reds, giving him a total of 41.1 per game. He has been allocated some of the biggest games this season, which proves he is one of the league’s best young officials.

This game is quite tough to call. Leicester have provided many upsets in recent years, not least winning the league itself. Therefore, I’m going to plump for a draw.

Leicester City vs Chelsea will be televised live in the UK on BBC One with kick-off at 16:30 GMT.