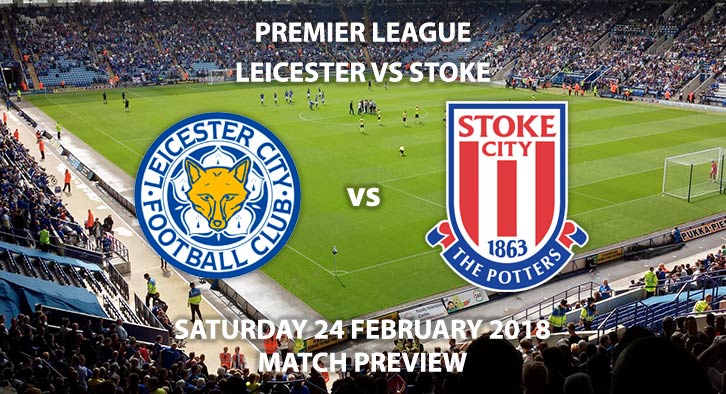 The Foxes have won only one of their last five games but did progress into the FA Cup quarter-finals last weekend. Jamie Vardy’s header secured their place in the last eight as they saw off Sheffield United. Riyad Mahrez also made his first start since his failed deadline day move to Manchester City. The Algerian winger provided the cross for Vardy’s winner and looked in fine form with the rest of the season to follow.

Leicester haven’t lost at home since last year, a run stretching seven games. Claude Puel has turned the King Power into a fortress, which, as a result, has seen Leicester move to eight in the league. With Mahrez back on side, there is a real belief the club can secure a Europa League place. They currently sit one point and place behind Burnley, meaning their hopes of European football are firmly alive.

Stoke have collected just one win in Paul Lambert’s first four matches. The Potters are winless in three games and haven’t won away from home since October last year. No win in nine games on the road has seen them drop to 19th, two points adrift of safety. Huddersfield’s win last week has further increased the pressure on Lambert as he hopes to steer the club clear of the drop zone. Conceding goals has been their major problem; they have the league’s leakiest defence. 53 goals in 27 games averages at just under two a game, which is an alarming statistic.

Michael Oliver has been chosen to officiate this match. Oliver has refereed the most Premier League this season, averaging 38.6 booking points per game. This is the league’s fifth-highest total, although he is one of only two refs to officiate over 20 games. Stoke haven’t won against Leicester since 2015. The Foxes have won two of the last five meetings, with the other three ending in draws.

Whilst Stoke appear to have improved under Lambert, their form away from the Bet 365 Stadium has been woeful. Given the host’s impressive home form, I think they’ll take all three points on Saturday which will therefore plunge Stoke into deeper trouble.

Leicester City vs Stoke City will be televised live in the UK on Sky Sports with kick-off at 12:30PM GMT.

More markets will be added over the weekend prior to the game kicking off tomorrow. Keep visiting the tips and preview area for further updates and betting previews for this weekend’s fixtures.