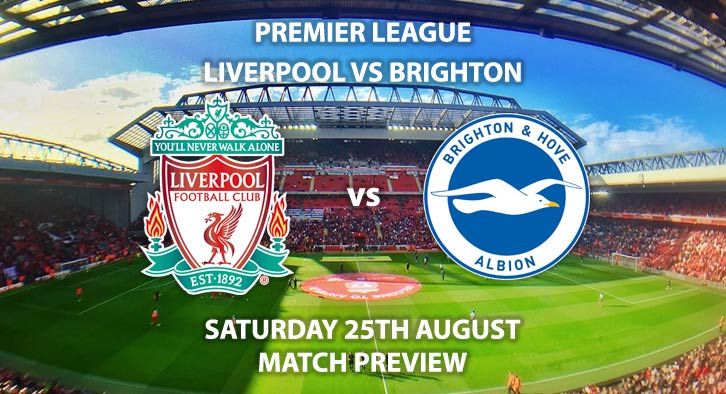 Liverpool vs Brighton – The Reds will be looking for a third league win in as many games when they face Brighton at Anfield.

The Reds secured back to back league victories with a 2-0 win against Crystal Palace on Monday night. James Milner’s penalty and Sadio Mane’s injury-time strike did the damage against ten-man Palace. Naby Keita put in another eye-catching display, having impressed in their opening-day win again West Ham. The midfield playmaker was a constant threat; he already looks like a fine purchase having made the £60m move from Red Bull Leipzig. Mane has also started the season in fine form, with three goals in two games. He has continued his partnership with Mohamad Salah and Roberto Firmino, who are a nightmare for any defence.

Virgil van Dijk produced another man of the match performance. The Dutch defender has been a revelation since joining the club from Southampton last January for £75m. He has installed an air of confidence in the back four, along with the addition of Alisson in goal. VVD looks like the perfect tutor for Joe Gomez, who has begun the season as his centre-back partner.

Brighton grabbed their first win of the new season with an eye-catching victory over Manchester United. The Seagulls condemned Jose Mourinho’s side to their first defeat of the campaign, with Glenn Murray, Pascal Gross and Shane Duffy inflicting the damage. There has been plenty of talk about ‘second season syndrome’ at the Amex, but Chris Hughton’s side put those concerns at ease with a fantastic display. They are, however, a much different proposition on the road – it’s their home form that kept them up last season.

Chris Kavanagh has been appointed as the referee for this game. The Englishman has officiated one match this season, showing three yellow cards. Last season he averaged 38.7 booking points and therefore I’d advise a maximum of 40+ for this game.

Liverpool have looked already looked as though they will be the strongest side to challenge Manchester City for the title. Brighton are a match for most at home, but they struggle away from the Amex. As a result, I’d plump for a home win, with the Reds to bag a few goals in the process.

Liverpool vs Brighton will be televised live in the UK on BT Sport 1 with kick off at 17:30 GMT.