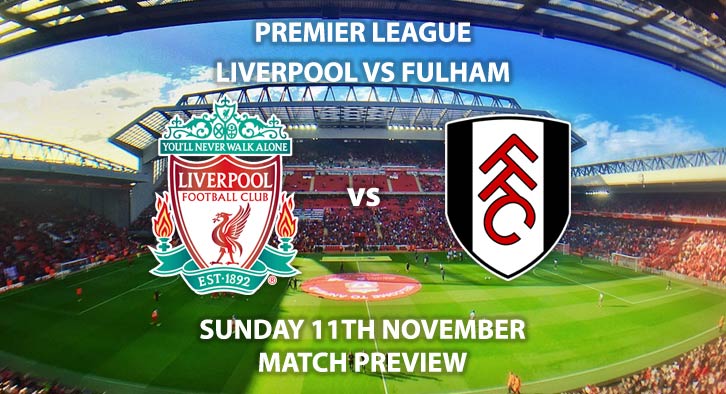 Jurgen Klopp’s side are knocking on the door of league leaders Manchester City alongside Chelsea, so three points is vital for their title bid. Meanwhile, Fulham are currently rock bottom of the league with 5 points from 11 matches.

Liverpool are backed as heavy favourites by SkyBet, who have priced them at 1/10. The Reds will be looking to bounce back from a very disappointing result midweek against Red Star Belgrade in the UEFA Champions League. Their front three has continued to impress his season, however have been a little less prolific. The player with the most goals so far is Sadio Mane with six to his name. He is priced at 7/2 to break the deadlock.

Their defensive record at home has been exemplary. With a rate of just 0.2 goals conceded per home match, they will be looking at Fulham as another great opportunity for a clean sheet. SkyBet are offering 4/6 for Liverpool to keep a clean sheet and great odds of 8/11 to win to nil.

Fulham have a tough test on their hands as they are priced at a huge 25/1 to come out victorious. With a run of six straight defeats, it’s been a bleak time for the football club and their record against Liverpool doesn’t help their cause. In their last four matches against them they’ve conceded an average of 3.5 goals. Their record on the road this season has been poor too, with just one point claimed from a possible 18. They have been behind in 50% of their away matches at half-time. For Liverpool to win both halves you get odds of 8/13.

If Fulham are in a chance of finding the net then Aleksandar Mitrovic is their best chance of doing so. The striker has bagged five this season and is a physical, problematic striker for defenders to deal with. He is priced at 7/2 to score anytime.

The referee for this match will be Paul Tierney. He has averaged 38.3 booking points in his 6 Premier League matches.

Where to Watch: Liverpool vs Fulham will be televised live in the UK on BT Sport 1 and kicks off at 12:00 PM GMT.

– Their attacking force will open up the Fulham defence with ease.