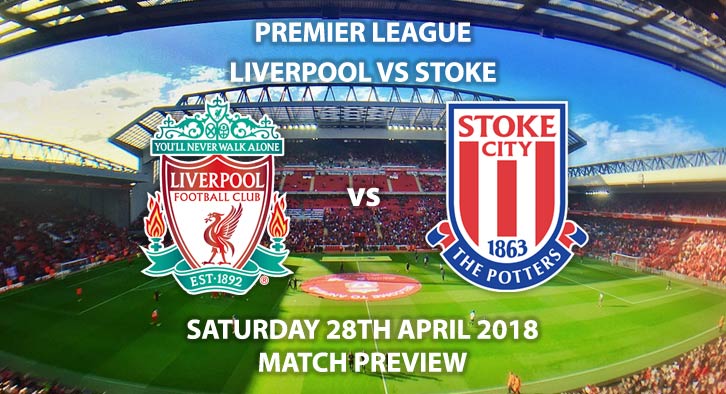 Liverpool vs Stoke City: Liverpool will be hoping for victory against relegation-threatened Stoke as they continue their push for a top-four finish.

The Reds come into this game off the back of their 5-2 midweek victory over Roma. Mohamad Salah produced another spectacular display, further strengthening calls for him to challenge for the Ballon d’Or. The Egyptian grabbed a brace in their semi-final win, although Jurgen Klopp’s side did surrender a two-goal lead. Those two late strikes for Roma gave them crucial away goals, which could be pivotal. It leaves Roma needing to produce another 3-0 win at the Stadio Olimpico in order to progress. In the league, Liverpool again conceded two late goals as they drew 2-2 with West Brom. The Baggies fought back to earn a point, despite Liverpool looking home and dry. This week, they’ll be hoping for no mistakes. Four more points is all that is needed to secure a second consecutive top-four finish.

Stoke’s draw with Burnley last weekend plunged them further into trouble. That fixture was circled as ‘must win’ for the Potters. The result leaves them 19th, four points adrift of safety. With Liverpool, Crystal Palace and Swansea left to play, it’s clear Stoke need a minimum of two wins to stand a chance of avoiding the drop. As they’ve not won away since November, I don’t see them winning at Anfield. Should they make the unfortunate plunge into the Championship, I expect them to stick with Paul Lambert. Having led Norwich to promotion he could be the man to help them bounce back, at the first time of asking.

Andre Marriner is the referee for Saturday’s lunchtime clash. The Englishman has an average booking points total of 30.8. That score leaves him in mid-table for top-flight referees. As a result, I would avoid any big bets on a high number of booking points.

I really can see only one winner in this game. Liverpool might rest a few players with a trip to Rome on the horizon but I still expect them to take all three points.

Liverpool vs Stoke will be televised live in the UK on Sky Sports Premier League HD with kick off at 12:15 GMT.

Odds and markets last updated on 27th April 2018 @11:55 GMT. Markets will be updated ahead of kick off so keep checking this page back.

Don’t forget to kee visiting the tips and preview area for further updates and betting previews for more previews for this upcoming weekends FA Premier League.