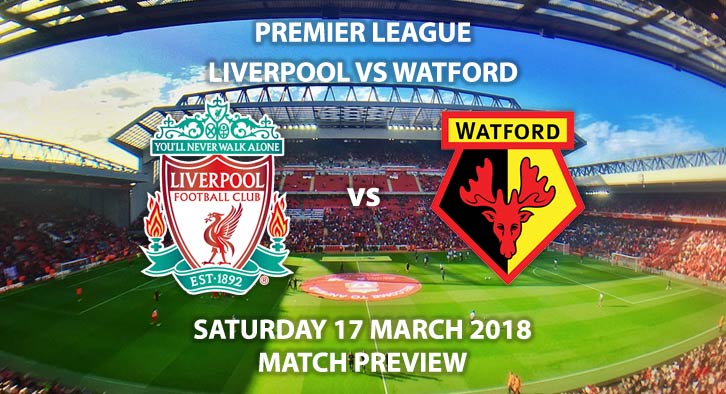 Liverpool vs Watford:- Liverpool host Watford in the Premier League this weekend as their bid for a top four spot continues.

The visitors have managed to break away from the hectic bottom half of the table however aren’t quite safe just yet. Both clubs were unsuccessful in their previous outings so three points will be crucial to both their causes.

Liverpool are currently fourth in the Premier League, with a place in the top four still anything but secure. Jurgen Klopp’s men most recently lost to bitter rivals Manchester United 2-1 that saw them lose ground on the top three. Their potent front three of Mo Salah, Sadio Mane and Roberto Firmino was rendered ineffective despite their very impressive goal scoring tallies. They have led an attack that has scored two or more goals in 63% of their matches. Salah has stolen headlines however, with 24 goals and 8 assists.

Defensively, Liverpool have been suspect however the introduction of Virgil Van Dijk has been positive. They have conceded the most goals in the top five, with 34 going past them in 30 matches. However, they have managed to keep a clean sheet in 40% of their league matches this season. They are favourites and will be hard seeing them not get a result.

Watford are currently 10th in the Premier League and 9 points from the relegation zone. Their recent result was not a highlight of their season as they were taken apart by Arsenal in a 3-0 defeat. Troy Deeney missed a penalty that proved vital to the result. Deeney is part of a Hornets attack that has scored two or more goals in 46% of their matches. Their top scorer is Abdoulaye Doucoure.

Watford’s defence has painful to watch at times. They have conceded 50 goals in 30 games and have managed a clean sheet in 26% of those matches. Watford have managed to shock to bookmakers a couple times this season against the top six, however Liverpool’s attacking power should be too much to deal with.

The referee for this match is Anthony Taylor. He shouldn’t have too much to worry about as both sides have shown discipline throughout the campaign. Liverpool have averaged just 12.8 booking points and Watford have averaged 20.

Watford vs Liverpool will be televised on BT Sport 1 and kicks off at 17:30.