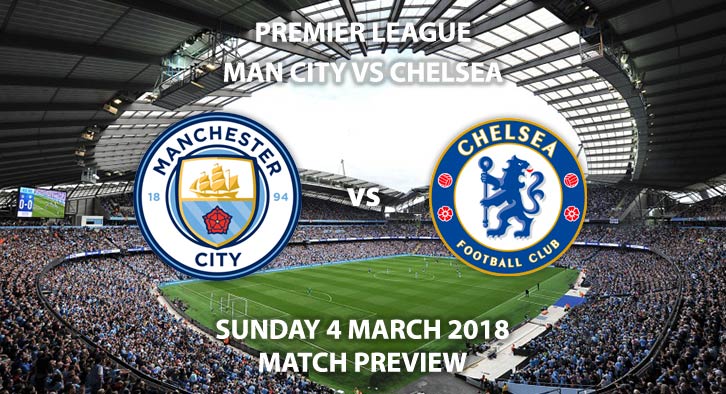 Fresh from lifting the Carabao Cup, City will be want to ensure they secure the Premier League title. Having led the way for so long, it’s important City don’t lose focus as they enter the final push. Pep Guardiola’s men have been fully deserving of the league title this year, but beating the current champions may be necessary to seal their success. City currently sit at the top of the division, 13 points clear of Manchester United. They do have a game in hand, which they play against Arsenal this Thursday at the Emirates.

Chelsea will be reeling after losing 2-1 at Old Trafford. Antonio Conte’s side were in pole position after taking the lead, but goals from Romelu Lukaku and Jesse Lingard saw United turn things around. That results left the champions in fifth, two points behind Tottenham and four behind Liverpool. With the same number of games played, Chelsea can’t afford to lose this match. With another round with Barcelona to come in the Champions League, securing a top-four finish is vital for their season. Willian has been in good form recently, having scored first in both his last two games. He and Eden Hazard have matched the shortfall left by the club’s toothless attackers. Alvaro Morata made his first start in six weeks and looked like a striker short of fitness and confidence.

City have won two of their last five games against Chelsea. The Blues have won the other three, including the last meeting at the Etihad. City last beat Chelsea at home in 2015 as they went on to win the league that season. Similarly, Chelsea were the champions as they are now.

Michael Oliver has been selected to referee this match. He has an average booking points total of 38.7, the fourth highest in the league. He has reffereed the most games in the division this season, averaging 3.4 yellow cards and 0.2 red cards per game.

This is a huge game. Chelsea could make a huge statement with a victory here, in a game they dare not lose. For City, another win would all but seal their fourth league title. Therefore, I’m going for a narrow home win. I think BTTS and City to win is a good bet, with BTTS and over 2.5 goals a safer option.

Manchester City vs Chelsea will be televised in the UK live on Sky Sports with kick-off at 16:00 GMT.

More markets will be added later today prior to the game kicking off on Sunday afternoon. Keep visiting the tips and preview area for further updates and previews for this weekends fixtures.