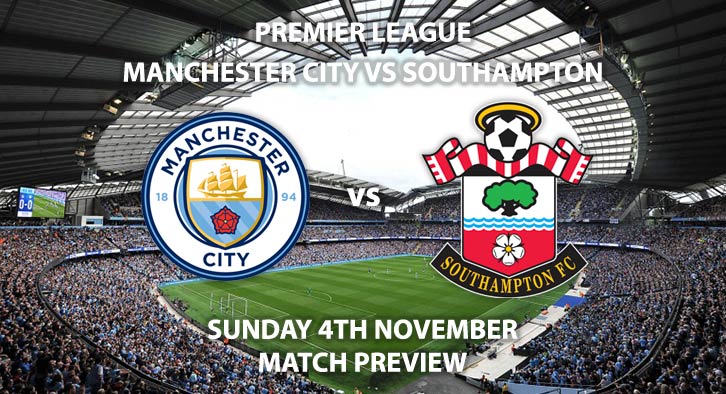 Manchester City and Southampton will lock horns this weekend in Premier League action.

Both sides are operating at different ends of the table. The hosts currently top the league, with eight wins from ten matches. Meanwhile the visitors are checking their shoulders with only one win all season so far.

Manchester City are clear favourites for this one, priced at 1/9 by SkyBet. The league leaders will also have the added advantage of playing in front of a home crowd, an advantage that has seen them score twice or more in every home match this season. Amongst the goals has been Sergio Aguero. The striker has already scored six goals this season and was unfortunate to not score in their last outing. The Argentinian is 9/4 to open the scoring.

Their impressive home form has seen them score 18 goals from five matches. The score 3+ goals, SkyBet are offering odds of 4/9. In those five home matches they have also only conceded twice. City are at great odds to win to nil priced at 8/13.

Southampton are priced at a huge 20/1 to win this Sunday. They are currently only two points from the drop zone and have been their usual frustrating selves for since the opening day. With their only win coming away at Crystal Palace and goals looking scarce, the saints will be hoping for a confidence boost. Most likely to bag for his side and having scored 50% of all their goals this season is Danny Ings. The ex-Liverpool man has scored three goals this campaign and is 10/3 to score anytime.

Southampton have failed to score in their last five matches and have conceded eight in the process. City have slaughtered a fair few teams already with big score lines and I could see this weekend being another visit to the slaughterhouse. If you think the Saints are capable of pulling off a miracle then you’ll be tempted to back Southampton to win and both teams to score at 50/1.

The referee for this match will be Lee Mason. The official has averaged 38 booking points from his five Premier League matches.

Manchester City vs Southampton will not be televised in the UK and kicks off at 15:00. Highlights can be watched tonight on BBC 1 Match of the Day 2.

– They have far too much quality to drop any points this Sunday.