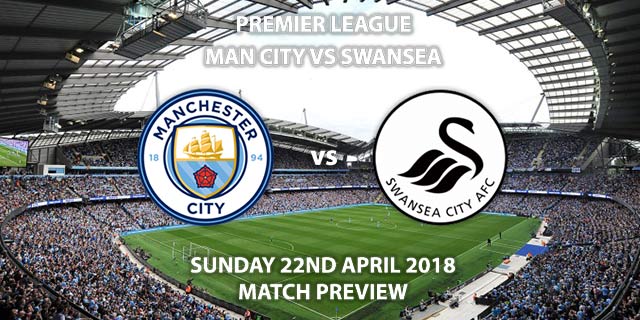 The hosts have officially now won the Premier League after a very dominant season at the top spot. The visitors are still hoping to avoid relegation and hope that the momentum of Carlos Carvalhal’s introduction can carry them over the line.

Manchester City are 1st in the Premier League with no more competitive competitions to worry about. With their season all but done, Pep Guardiola may be likely to play a few more less experienced figures in the squad. The likes of Kevin De Bruyne, Leroy Sane and Sergio Aguero have been pivotal to the Citizens success this season. They have led an attack that has scored 93 goals in 33 league appearances.

Also, they have scored two or more in 87% of their home matches this season. Not only have they scored the most this season, they have conceded the least too. Their strong defensive line has conceded 25 goals all season and kept a clean sheet in 37% of their home Premier League matches. Clear favourites for this, although unsure at to how strong they will line up.

Swansea are currently 17th in the Premier League, five points from the drop zone. They also have a game in hand on teams around them which could be crucial at this stage. The Swans have seen a complete uplift in their performances of recent months and havent shied away from the top six teams in the Premier League. Their attacking intent has improved, with Jordan Ayew the focal point. Swansea have scored only 27 goals in 33 games and have managed to score two or more in only 11% of their games on the road.

Defensively, Swansea have been tougher to break down than the teams around them. They have conceded 46 goals; the best defensive record in the bottom half. Alongside this, they have kept a clean sheet in 27% of their league matches this campaign.

The referee for this fixture will be Craig Pawson. The official has awarded an average of 40.5 booking points in his 21 Premier League matches.

Manchester City vs Swansea City will be televised live in the UK on Sky Sports Premier League with kick off at 16:30 GMT.

Odds and markets last updated on 22nd April 2018 @11:30 GMT. Markets will be updated prior to kick-off on Sunday so keep checking back.