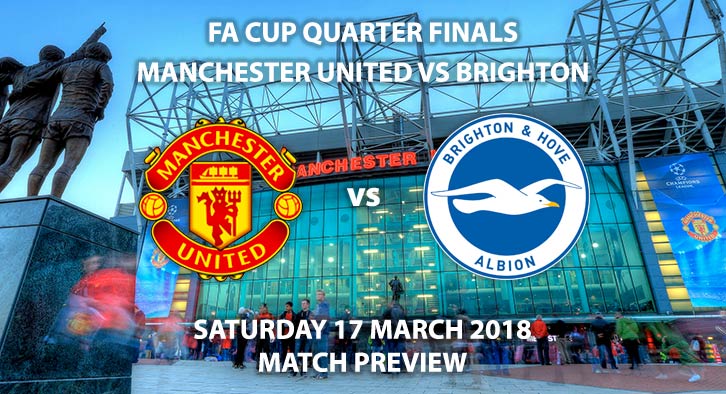 United crashed out of the Champions League in midweek after losing 2-0 to Sevilla. The contrast between their performance against Liverpool compared to Sevilla was like day and night. The stark difference between these two displays will trouble Jose Mourinho, in addition to losing against inferior opposition. With just one piece of silverware on offer, Mourinho needs a trophy to save their season.

The FA Cup is something Manchester United have always performed well in this competition. They have won it 12 times, which is second to only Arsenal. Another win in this competitions would see the Red Devils equal that tally. Marcus Rashford returned with a bang with two goals in the North West derby. The Englishman has struggled for game time since the arrival of Alexis Sanchez but as a result of an injury to Anthony Martial has allowed the youngster to remind what he is capable of.

Following a good string of result, Brighton fell to a 2-0 defeat to Everton at the weekend. Chris Hughton’s side were not aided by Antony Knockaert’s red card for a terrible lunge on the returning Leighton Baines. Five wins in seven in all competitions has seen them rise to 11th place, seven points clear of the relegation zone.

Whilst the Seagull’s job is not done, they should be able to secure a second consecutive top-flight appearance with eight games left. This will be their toughest test so far in the competition. Having faced just one Premier League side on route to the last eight, a trip to Old Trafford will be the highlight of their cup run.

Manchester United have won four of the last five meetings between the two sides, including the league fixture back in November. Brighton have only ever beaten United one in their history, a win that came back in 1982. They have never won at Old Trafford.

Andre Marriner will officiate this FA Cup quarter-final tie. He has officiated the third most games this campaign, collecting an average booking points total of 28.1. Compared to other referees who have similar numbers of matches, this is the lowest by some way. Thus, booking points may not be something to bet on at the weekend.

I expect to see a reaction from United. Therefore, I’m backing them to win this tie. Mourinho won’t take anything for chance and understands the importance of this competition. Brighton could make it tough for them, as they did against Arsenal a few weeks ago but United should progress.

Manchester United vs Brighton will be televised live in the UK on BBC 1 with kick off at 19:45 GMT.