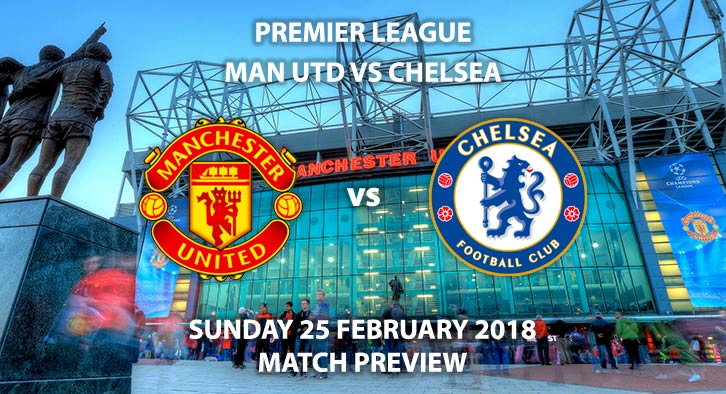 Manchester United vs Chelsea – Jose Mourinho and Antonio Conte go toe to toe as they face off at Old Trafford, with both teams looking to move clear in the race for the top four.

Manchester United will be hoping to close the gap at the top of the Premier League to 13 points with victory at Old Trafford. After losing their last top four contest to Tottenham a few weeks ago, this game provides the perfect opportunity to bounce back. United are four points clear of fifth-placed Spurs and need another win to avoid being dragged into a top-four battle.

United’s progression into the FA Cup quarter-finals will have pleased supporters. Having collected the Carabao Cup in his first season in charge, Mourinho will be desperate add more silverware to his collection. With the Premier League gone, the FA Cup and Champions League will be vital for them. At home, United are unbeaten in five games. They have lost just once at home this campaign, to Manchester City. United have conceded just five goals at home this season, whilst they’ve scored 29. Alexis Sanchez scored just once against Chelsea in his days at Arsenal and the Chilean will be hoping to equal that tally in Sunday’s crunch clash

Chelsea come into this game off the back of an impressive performance against Barcelona. Despite the result, Antonio Conte’s side looked back to their best, with Willian and Kante particularly impressing. The Champions looked like their old selves as they made things tough for one of Europe’s most deadly attacks. Both Alvaro Morata and Oliver Giroud were left on the bench for that game, which leads me to believe one of the two will start on Sunday. The former Arsenal striker scored a late equaliser for the Gunners on his last trip to Old Trafford.

United have won just one of their last 14 meetings with Chelsea. Chelsea’s last victory at Old Trafford came in May 2013 but they’ve only lost on one of their last six visits. Martin Atkinson has been appointed as the referee for this crucial match. Atkinson has an average booking points total of 39.5, which is amongst the highest in the league. He has also brandished four red cards this season, the fourth highest in the division. As a result, booking points may be something to look into for this fixture.

Whilst I think this will be a very right game, I do think we will have a winner. I’m tipping United to take the points. With Chelsea just coming off the back of a really mentally and physically draining match against Barcelona I think the hosts will capitalise.

Manchester United vs Chelsea will be televised live on Sky Sports Football HD with kick-off at 14:05 GMT.

More markets will be added over the weekend prior to the game kicking off on Sunday. Keep visiting the tips and preview area for further updates and betting previews for this weekend’s fixtures.