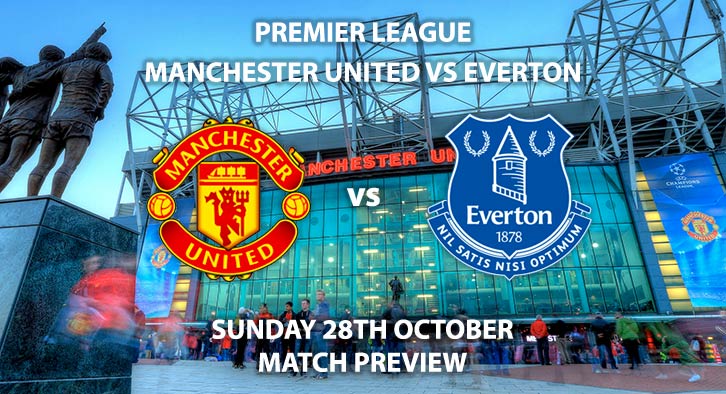 Manchester Utd vs Everton – The Red Devils will be looking to bounce back from their defeat in midweek against Juventus when they take on Everton at Old Trafford.

Jose Mourinho’s men suffered a 1-0 defeat to the Italian giants on Tuesday thanks to Paulo Dybala’s first-half strike. That left United with four points from their opening three games, whereas Juventus have nine. They’re now embroiled in a two-team battle with Valencia for second spot. If they failed to qualify for the knockout rounds it would only further increase the pressure on Mourinho. Anthony Martial followed up his two goals at Stamford Bridge on Sunday with another eye-catching performance. The Frenchman seems to be finally building some form under Mourinho. This is underlined by the fact Mourinho named an unnamed side against Juventus for the first time in 46 matches. That highlights the lack of consistency at United, and why so many of their players are struggling to build momentum.

Everton recorded a third consecutive win last weekend after beating Crystal Palace 2-0. Two late goals, from Dominic Calvert-Lewin and Cenk Tosun, sealed the victory for Marco Silva’s side. Everton have struggled for a goal-scoring striker this season, with Richarlison often used in that position. The Brazilian forward certainly has an eye for goal, but is not a natural number nine, at the age of only 21-years-old. Calvert-Lewin, similarly, is still finding his feet as a central striker, whilst Tosun’s form has been hit and miss. Gylfi Sigurdsson has been their main source of goals, alongside Richarlison, highlighting that it is very much an area to be strengthened.

Jonathan Moss is the referee for this game. The Englishman has officiated seven top-flight games this season, accumulating an average of 42.1 booking points this season. As a result, I would recommend a maximum of 60+ booking points for this fixture.

This will be a tough match for United. Everton are on a decent run and do have players that can hurt them on the counter-attack. However, they have improved in recent matches, so I think they will edge a very tight encounter.

Manchester United vs Everton will be televised live in the UK on Sky Sports Main Event with kick off at 16:00 GMT.