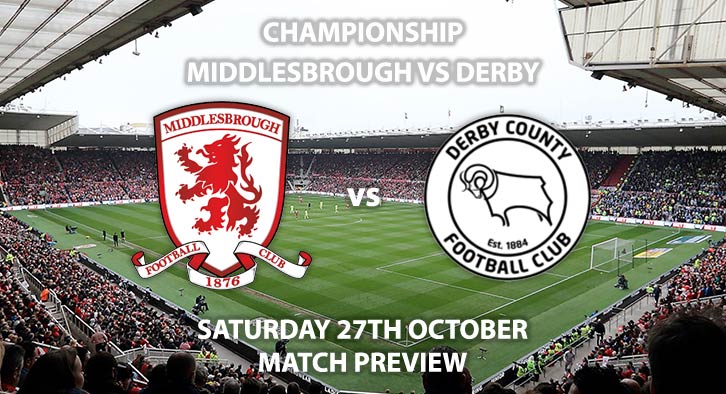 Middlesbrough vs Derby County – In attempting to cap off a magnificent week for Derby, Frank Lampard’s side travel to second place Middlesbrough.

This promises to be the most tantalising fixture of the matchday. Also, the third in a line of battling promotion rivals, Derby come into this match off the back of two excellent results. The first of which was a 2-1 home victory against Sheffield United, courtesy of goals from Craig Bryson (after 19 seconds) and Jack Marriott.

Derby’s last result is the real one to shout about though, demolishing West Brom 4-1 at The Hawthorns. Such is the optimism Lampard has brought to the club, the manager still said his team could have done better.

A triumph over Manchester United in the Carabao Cup and a glittering tie against former club Chelsea in the offering in the next round, The Rams have only lost four of the 17 games under Lampard’s guidance. As such, Derby are heavily fancied to be in the mix come the end of the season.

Middlesbrough can better that previous statistic, however, only losing twice all season, and just the one time at home. That was in a 2-0 defeat to Derby’s East Midlands rivals Nottingham Forest at the beginning of the month.

Tony Pulis will probably be somewhat pleased but not overjoyed with his side’s start to the season. Always at the top end of the table, Boro have failed to capitalise on neighbouring team’s incapability to string a run together by being inconsistent themselves. Three wins from the last nine league games does not scream automatic promotion credentials.

That is still where the Teesiders currently reside, though. Level on points with top-of-the-table Leeds and third-placed Sheffield United, Boro are second via goal difference. Derby currently sit in fifth and are one of three teams, alongside West Brom and Norwich City, that are just two points afield.

A clash of styles could be at hand, which will not come as a surprise to anyone familiar with Tony Pulis teams. The Welshman has characteristically set out his side to be organised, boasting the division’s best defence. Only seven goals conceded in 14 matches and eight clean sheets is an outstanding record. With Derby conceding in their last six away matches, a classic Pulis 1-0 performance could be at hand.

A total of just 16 goals (only five teams have scored less), is clearly what has prevented Boro from nailing down top spot. Which is unequivocally the ambition for the season, as Pulis wouldn’t have been recruited for anything else.

Derby harbour their own ambitions to reach the Premier League and have done for some time. Backing Lampard in the transfer market, the board seem in unison with the club and the fans. Optimism rings around Pride Park but this game, at the Riverside, will be the truest of indicators as to whether Derby are one of the division’s best teams.

The referee for this vital clash will be Peter Bankes, who already has some history with Derby this season. The Englishman sent off Tom Lawrence before giving Lampard his marching orders too in a bizarre game. In total Bankes has dished out 61 yellows and two reds already in his fourteen matches this season.

Middlesbrough vs Derby County will be televised live in the UK on Sky Sports Football with kick off at 12:30

Odds and markets last updated on Saturday 27th October @10:00 GMT. Keep checking back to see if there’s any updates to markets – the time stamp in the previous sentence for when we update tips on this page will be updated.