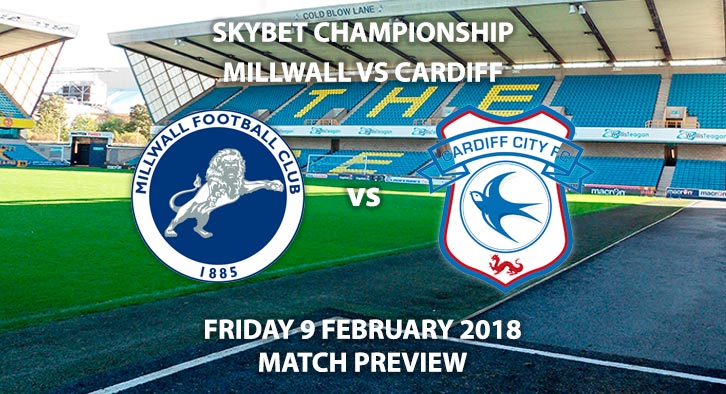 Friday night Championship actions see Millwall vs Cardiff City live on Sky Sports. Millwall will be hoping to continue their fine run of form as they meet promotion-chasing Cardiff City at the New Den.

After a run of one defeat in seven games, Millwall have moved clear of the relegation zone. Neil Harris’ side now sit in the 14th place, 12 points clear of danger. Whilst they have always been impressive at home, it is their recent away record that has caught the eye. Back to back victories against Leeds and Reading has only boosted morale around the camp, with the club now seemingly safe on their return to the division.

Despite their good run of results, Millwall were knocked out of the FA Cup by Rochdale in midweek. With a spot in the 5th round up for grabs, Harris will be disappointed by the loss, especially against lower-league opposition. With 13 points separating them and the top six, a late play-off surge looks unlikely.

Most fans would have been thrilled with avoiding relegation at the start of the season, which only further illustrates their overachievement. Having beaten Derby and Leeds at home, whilst holding Wolves to a draw, the Lions will feel they have little fear ahead of the Bluebirds’ visit.

Cardiff’s 4-1 thumping of Leeds illustrated why they sit fourth in the Championship. With Neil Warnock’s side just three points behind Derby, with a game in hand, the Bluebirds are flying and look certain to secure a top-six finish at least. Deadline day addition Gary Madine made his debut at Elland Road following his six million pound move from Bolton.

The former Sheffield Wednesday striker has ten goals this season, more than any Cardiff player so far. If Madine can have a similar second half to the campaign then Warnock will be hoping that injection of attacking quality can help see them over the line.

After a blip in results during December, Cardiff are firmly back on the winning trail. Having built their promotion push on defensive solidity, only conceding four goals in their last six games will have pleased Warnock. Having picked up their first league away win since boing day last time out, they will be in good spirits ahead of this tough test.

Cardiff have lost just one of their last 11 games against Millwall. The Bluebirds only loss in that run came in 2014 at the New Den, with their last victory coming in 2012 at this ground. The last two meetings have finished 0-0 and the two before that were separated by just one goal, so this should be a tight contest.

Keith Stroud is the referee on Friday night. In his 17 Championship matches this season, Stroud has issued 4.3 yellow cards per game. His average booking points total of 48.8 is the third highest in the league, whilst he has also shown four red cards.

As the stats would suggest, I see this being a tight game. In the Championship, consistency is key and I think that if you offered Warnock a point now he would take it. Coincidentally, that’s what I think his side will pick up as they look to continue to build momentum.

Millwall vs. Cardiff City will be televised live in the UK on Sky Sports 1 with kick-off at 7:45 PM GMT.

To Score Any Time – Gary Medine – (link no longer available)