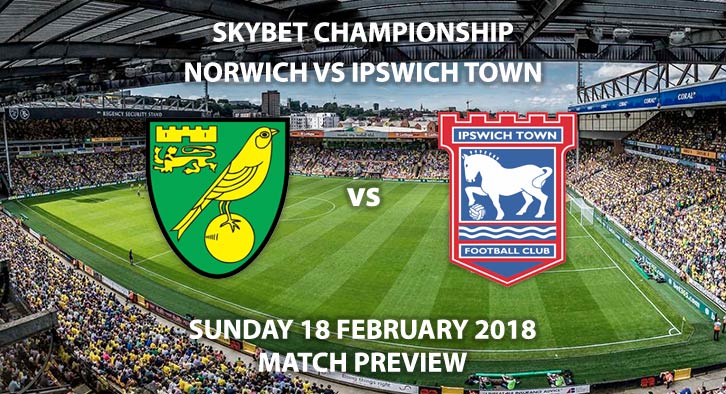 Norwich vs Ipswich Town – Norwich host Ipswich in the East Anglia derby looking for a win that would see them do the double over their rivals.

A good run of results has seen Norwich collect ten points from their last five games. With just one defeat in that time, the Canaries have also recorded impressive wins against Middlesbrough and Bristol City, followed by a draw with Derby. Daniel Farke’s men now sit in 13th place, eight points outside the top six. Whilst their recent form has improved, they’re still way off where they would have expected to be at the start of the season. In the summer there will be big pressure on Farke to get the club promoted or risk losing key players in the summer. James Maddison has been one of the Canaries best performers this season and has attracted a number of suitors from the top flight. If Norwich want to keep him, investing well in the summer could be key.

Ipswich sit one place above their rivals but are level on points with them. Town have only lost one of their last four games, which has seen them move clear of the relegation zone. With Mick McCarthy’s men going neither up or down, this game has little significance to the league table. With bragging rights up for grabs, however, it’s arguably their most important game of the season. McCarthy has recently been linked with the vacant Barnsley job but has reiterated his commitment to the Tractor Boys this week. Ipswich have struggled on the road this campaign and have won just one of their four trips away from Portman Road.

Norwich are unbeaten in their last nine meetings with Ipswich and haven’t lost at home since 2006. McCarthy’s side did, however, claim a point on their last visit to Carrow Road with a 1-1 draw in February last year.

David Coote is the official for Sunday’s derby clash, having refereed Sheffield Wednesday’s 2-0 victory over Derby in midweek. Coote has an average booking points total of 45.8 from 18 league games. This is one of the highest in the division, with an average of 4.2 yellow cards and 0.2 red cards per game.

Given Norwich’s recent dominance in this fixture, I think they’ll get another win on the board. The tractor boys haven’t performed well on the road recently, whilst the Canaries have won two of their last three games.

Norwich vs Ipswich Town will be televised live in the UK on Sky Sports from 12PM.