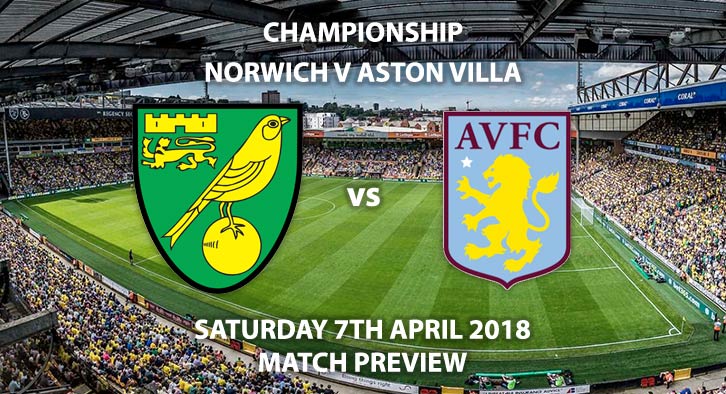 Norwich vs Villa: Aston Villa continue their promotion push as they take a trip to Carrow Road to face Norwich City in the Championship.

Villa returned to winning ways in midweek, comfortably defeating Reading 3-0. Steve Bruce’s side occupy fourth spot but are seven points behind second-placed Cardiff City. The Villans have also played a game extra than their Welsh rivals, meaning automatic promotion seems to be a step too far. Villa hold a 12 point lead over 7th place, meaning they will be involved in this season’s play-offs. Steve Bruce lead Hull City to promotion via this route in his last full season in charge. With the experience of players such as Glenn Whelan, John Terry and Robert Snodgrass, this won’t be something that daunts Villa.

They’re also boosted by the timely return of Jonathan Kodjia. The Ivory Coast striker has missed most of the campaign through injury but returned to the bench last weekend at Hull. Kodjia’s goals have been sorely missed this campaign and Bruce will be looking to get him fit and firing ahead of the play-offs.

Norwich have suffered a disappointing campaign. The Canaries sit in 14th place, ten points adrift of the play-offs. They have little to play for this season as they’re not going up or down. Marcus Madison has been the shining light in an otherwise dull season, highlighted by the Englishman’s inclusion in the Championship team of the season. Keeping the England U21 international at the club has to be the priority in the summer. A number of Premier clubs have already registered their interest in him, so it will be interesting to see how resistant the club will be to those approaches.

Norwich have little to play for and therefore I expect Villa to win. Momentum is key in the play-offs so it is important for them to string together some results. I therefore fancy BTTS and Villa to win.

Norwich City vs Aston Villa will be televised live in the UK on Sky Sports Football with kick off at 12:30 GMT.

Odds and markets last updated on 7th April 2018 @11:35 GMT. Markets may be updated prior to kick off so keep checking back before kick off for any further updates or markets.