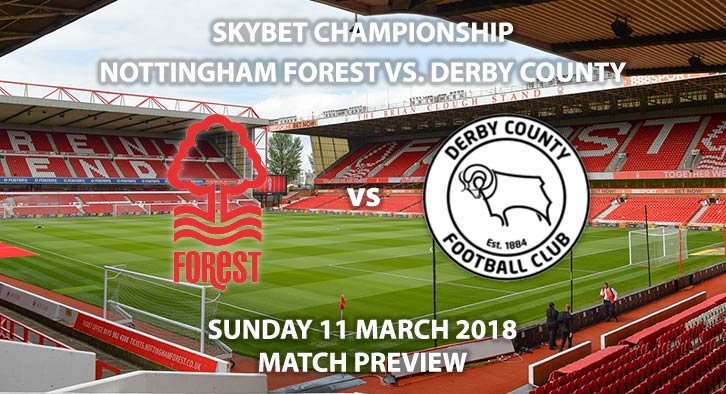 Bragging rights and the pride of the East Midlands comes with the territory. Also, for Derby a win is essential to maintain their dwindling automatic promotion chances.

Forest will be desperate to avenge their 2-0 defeat in the reverse fixture earlier in the season. That game featured an opening goal after just 24 seconds from Matej Vydra, so always expect the unexpected in this one.

The Rams are undefeated in their last four East Midlands derbies, winning three of them. This, and the direction Gary Rowett is taking the side in, is widening the gap between the two teams. But everyone knows that derbies are a complete leveller. Derby will be favourites, but you can guarantee that Aitor Karanka’s side will need to motivation to get one over on their biggest rivals.

Forest are in the abyss of mid-table at present. An early-season play-off challenge has fallen by the wayside and now The Reds are 15th, 14 points away from 6th. Derby were in 2nd just a matter of weeks ago, but without a win in six games they are now nine points adrift of Cardiff. The race isn’t over yet though, and consolidation of a play-off spot with ten games remaining is vital.

Forest are unbeaten in their last five, so will come into this full of confidence. One feels that the club are putting the foundations in place for a potential promotion challenge next season.

Jeremy Simpson will have the hard task of being the man in the middle for this one. Of the 33 Championship referees, only six give out a higher average of booking points (45.4). The tempestuous nature of this one lends itself to the idea of him having to give out plenty more. This is the type of game that both sides may find themselves adding to their one sending off of the season to date.

Nottingham Forest vs Derby County will be televised live in the UK on Sky Sports Football with kick off at 14:30 GMT.

More markets will be added over the weekend prior to the game kicking off on Sunday afternoon.