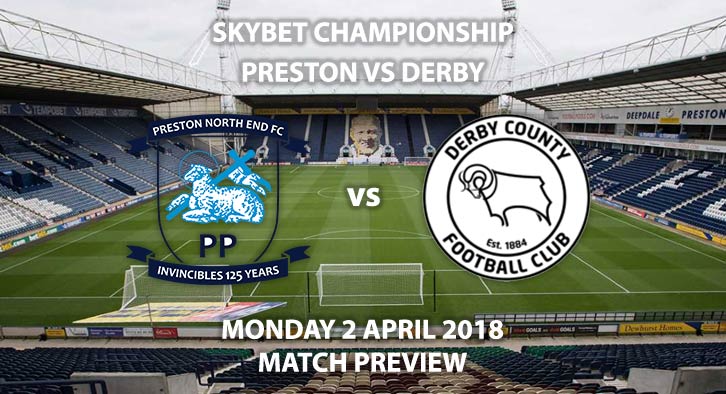 Preston vs Derby County – The race for the play-offs intensifies with Derby County looking to bounce back from their humiliating 4-1 loss at home to Sunderland against fellow promotion hopefuls Preston.

Even withstanding Derby’s recent poor form, a three-goal defeat to bottom of the table was far from expected. Gary Rowett has a task on his hands to turn it around it and cling on to their top-six position.

Nearing the final stages of the season, it couldn’t be tighter in the race for promotion. There are just two points between the two teams, in 10th and 5th respectively.

The Rams’ run without a win has now extended to eight games, creating a real sense of freefall. Had it not been for the excellent form earlier in the season the play-offs would surely be beyond reach. Such as the nature of The Championship.

Preston have once again done well to put themselves in contention. They have generally been inconsistent all season but keep racking up enough wins to be in with a shot. Much of that has been down to their stellar away form, which is the third best in the division.

At home it is a different story, where The Lilywhites have only won seven of their 19 fixtures. Additionally, Alex Neil’s side have also conceded in their last eight matches at Deepdale. Derby have only lost three away matches all term, but with their woeful form it makes it a rather difficult one to call.

Championship top scorer Matej Vydra got his first goal in five last time out. The form of the 18-goal Czech Republic international could be crucial in deciding this game, and Derby’s season.

Preston also come into this one on the back of a 4-1 drubbing, at the hands of Sheffield Wednesday. Meaning this game has all the markings of a tight affair with both sides desperate not to concede the advantage, and three crucial points, to the other. The Championship is never dull.

Tony Harrington will be the man taking charge of this one in his 26th Championship fixture of the season. In the previous 25 the Englishman has given out 85 yellow cards and four reds at a middling average of 38 booking points per game.

Harrington may be on hand to add to that total, given Preston’s worst-in-the-league disciplinary record. Neil’s men have received a massive 89 bookings and four red cards. This puts Preston clear of the field with an average of 26.1 booking points per match. For comparison, Bolton are the nearest challengers for that crown with 23.4.

A result neither side will be pleased about, Derby’s solid away form will keep them from defeat despite their slump.

Preston vs Derby County will be televised live on Sky Sports Football HD in the UK with kick off at 12:45 GMT.