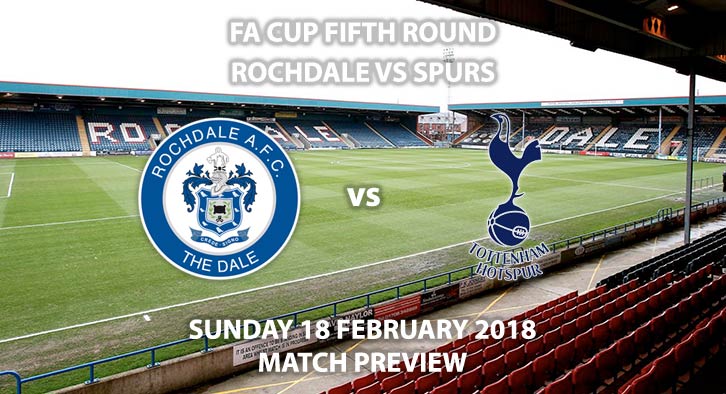 Rochdale vs Tottenham Hotspur – Tottenham Hotspur are back on the road this weekend as they face League One opposition in Rochdale in FA Cup action. The prize is a place in the quarter finals of the competition.

Spurs are fresh from their dramatic comeback in Turin against Juventus in the Champions League, where Harry Kane and Christian Eriksen helped Mauricio Pochettino’s side to restore themselves from an early two goal deficit. Spurs have had no issue finding the back of the net this season on the road, scoring two or more goals in 53% of their away Premier League matches. Against a lower league defence that has conceded 40 goals in 28 goals and sit at the bottom of League One.

Rochdale have had contrasting performances from their FA Cup campaign in comparison to their league campaign. Keith Hill’s side went toe to toe with Championship club Millwall in the last round, where they earned a replay at the Spotland Stadium. Rochdale went on to win the replay 1-0 and continue to have a cup run that has divided fan opinion on whether it’s what the club need. However, a fixture against Premier League opposition is a hard thing to turn down.

The Northern outfit have not faired very well in front of goal this season with two or more goals in only 29% of their league matches. In a more positive sign for Rochdale, they have managed to keep a clean sheet in 41% of their league home matches despite their poor league position. A team that clearly performs better in front of a home crowd, the fans won’t be writing their boys off.

Premier League official Bobby Madley will take charge of this fixture on Sunday. The referee hasn’t been shy to reach into his pocket this season, having awarded an average of 36.2 booking points in his 13 League matches.

FA Cup ties between a Premier League side and a lower league side is often a tighter contest than it seems on paper. This season has already seen some cup shocks; with Rochdale’s antics last round being one of them. Whether this mountain is too tough to climb is yet to be seen, with Spurs on a recent high after their positive return from their midweek trip to Italy. It is also unclear as to what strength side Spurs will name, with strugglers Fernando Llorente and Moussa Sissoko likely to get some more game time.

Rochdale vs Tottenham Hotspur will be televised in the UK on BBC One – kick off at 12PM GMT.