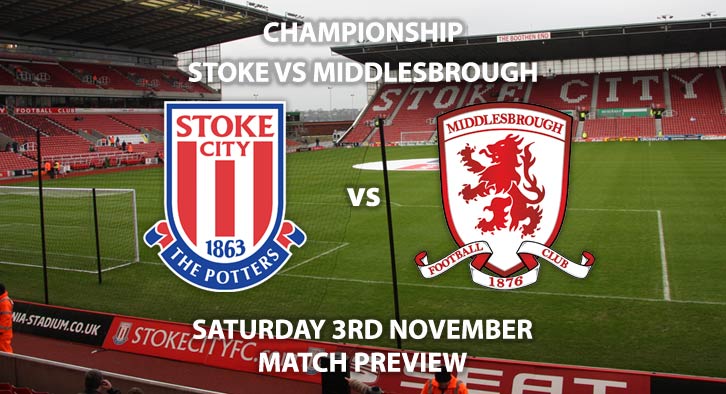 Stoke and Middlesbrough will lock horns this weekend in SkyBet Championship action.

Both sides are unbeaten in four of their last five league matches and are both within the big cluster of clubs in the top half of the league. Middlesbrough enter the match on the back end of a 1-0 win over Premier League Crystal Palace in the EFL Cup. Meanwhile, the hosts will be looking to build on their 1-0 win over Bristol City in the league.

Stoke are priced at 7/5 to claim victory on home turf by SkyBet. Stoke have the most expensive squad in the league (£133m) but are yet to transition this wealth into any sort of form. The standout performer for the Potters is striker Benik Afobe. He has managed four goals and two assists for Gary Rowett’s side and is price boosted at 6/1 to score first.

The home side have won three of their last five matches to nil. SkyBet have priced them at 3/1 to do it again.

Middlesbrough are priced at 2/1 to win this Saturday evening. They are operating in the top three for much of the season and are third entering this fixture. They have only lost two all season thanks to their sturdy defence. Six of their eight away matches have only seen one team score as they are a tough cookie to crack. With clean sheets in 60% of their matches, SkyBet have priced them at 9/4 to keep another one.

Going forward, striker Britt Assombolonga has been their standout goal scorer with five to his name. SkyBet have price boosted him from 5/1 to a massive 7/1 to open the scoring.

The referee for this match will be Robert Jones. The official has averaged 38.5 booking points in his 10 Championship matches.

Stoke have crumbled against tough opposition and Middlesbrough need a league win.

Odds and markets last updated on Saturday 3rd November @11:40 GMT. Keep checking back to see if there’s any updates to markets – the time stamp in the previous sentence for when we update tips on this page will be updated.