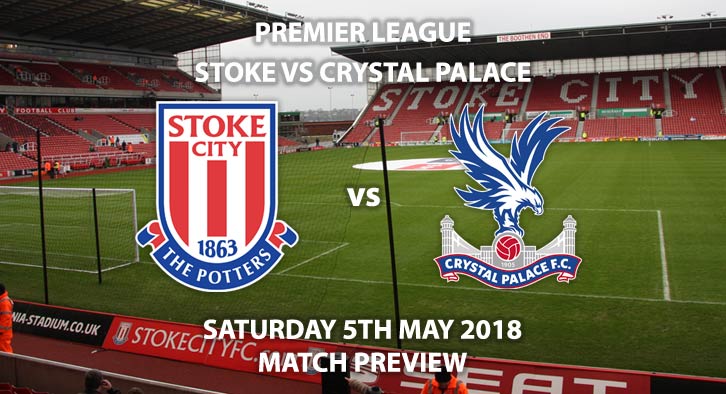 Time is running out for Paul Lambert’s side. The Potters are three points away from safety after picking up a point at Anfield last week. That 0-0 draw was Stoke’s first clean sheet in six games and keeps them undefeated in three matches. With a game against Swansea on the last day of the season to come, the next two results will shape their season. In order to move out of the bottom three, they would need to secure their first win in 12 games. That result against Huddersfield was Lambert’s only win in charge, a record he will need to rectify in the last two games.

Crystal Palace have all but secured their place in the next season’s top flight after picking up seven points from three games. Their 5-0 thumping of Leicester underlined the incredible job Roy Hodgson has done as Palace boss. The Eagles were bottom after 11 games with just four points, then six points adrift of safety. Since then, they’ve picked up 27 points in 24 games; a phenomenal turn around. The biggest task now is keeping hold of Wilfried Zaha. The former Manchester United man has been the catalyst in Palace’s revival and is attracting interest from a number of top-four clubs.

Martin Atkinson is the referee for this crunch clash at the Bet365 Stadium. The Englishman has an average booking points total of 41, the highest in the league. With so much on the line in this fixture, tempers could easily flare. I’d advise a maximum of 40+ booking points each team.

This is such an important game for Stoke. Realistically, they have to win to have any hopes of surviving. However, I think they’ll fall short against an in-form Palace side, resulting in a draw.

Stoke City vs Crystal Palace will be televised live in the UK on Sky Sports Premier League with kick-off at 12:30 GMT

Odds and markets last updated on 4th May 2018 @15:53 GMT. Markets will be updated ahead of kick off so check back again before kick-off to see if there’s been any updates to the above picks.

Keep visiting the tips and preview area for further updates and betting previews for more previews for this weekend’s FA Premier League and SkyBet Championship action.