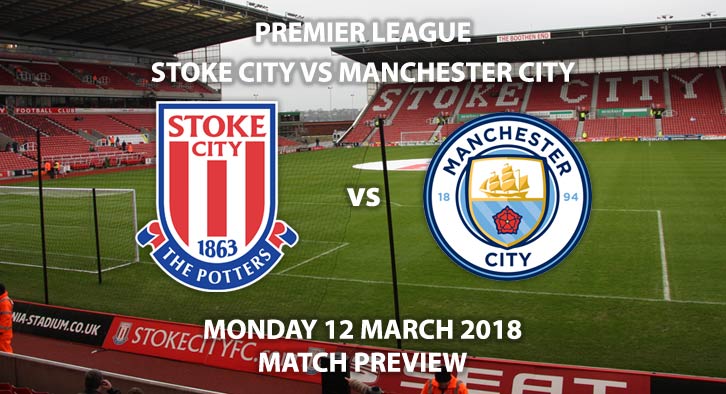 Stoke City vs Manchester City:- Manchester City travel to relegation-threatened Stoke as they look for another three points to move them closer to the Premier League title.

After another victory in midweek against Basel, City face a different test on Monday night. Having safely secured their passage into the Champions League quarter-finals, Pep Guardiola’s side have their eyes firmly set on winning the league. Recent victories over Arsenal(twice) and Chelsea have firmly set Guardiola’s men on their way. Stoke, however, will offer a different test. City struggled in these types of games last year and whilst there has been no repeat this time around, it could be an interesting test for them. Having rotated his side in midweek after a busy schedule, they should be fresh and ready for action. City could welcome back Fernandinho to the fold after injury. Ilkay Gundogan has filled the Brazilian’s role in recent matches and has been impressive, so Guardiola may opt to rest Fernandinho with crucial games ahead.

Stoke go into this game in the bottom three. They currently sit in 19th place but are just one point outside the relegation zone. Whilst games against teams of City’s calibre won’t define their season, every game is now vital. Stoke need to turn the Bet365 Stadium back into a fortress, starting Monday night. With big relegation ‘six-pointers’ to come, building momentum is crucial if they’re to avoid the drop. Stoke have only lost one of their last six games but it’s three points they desperately need. They have started to pick up points on the road, having drawn their last two, however, they need to start winning their home matches. Xherdan Shaqiri has re-captured some form in recent weeks, which could be the Potters best hope of getting out the mire.

Manchester City have won three of their last four games against Stoke, scoring 15 goals in the process. Guardiola’s side put seven past the visitors in the corresponding fixture earlier this campaign and scored four times on their last visit to the Bet365 Stadium. Stoke’s last win against City came at home in 2015, with a Marko Arnautovic brace sealing the victory.

Jonathan Moss will be the referee for Monday night’s clash. The Englishman has the joint second highest number of average booking points when compared to referees who have officiated over 20 games this season. With a score of 38.6, he has brandished 76 yellow cards and two red cards this campaign. Thus, 20+ booking points each team could be a good bet.

Although Stoke are fighting for their lives, I think City will win the game. Paul Lambert’s side have improved recently and another good performance will give them hope for the rest of the season. City, however, are just too strong and therefore I would back them to win.

Stoke City vs Manchester City will be televised live on Sky Sports Football with kick off at 20:05.

Unlikely further markets will be uploaded tonight. Keep visiting the tips and preview area for further updates and betting previews for more previews from this weeks European and Domestic league action.