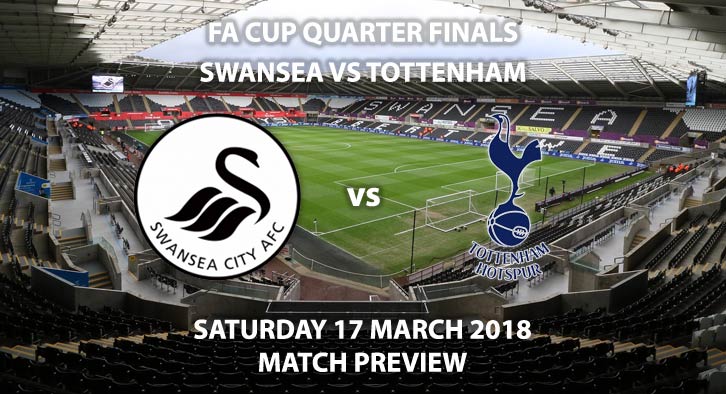 Both sides will be hoping for cup success after Tottenham’s recent Champions League exit and Swansea’s uninspiring Premier League campaign. The match will progress straight to extra-time and penalties if it is a draw after 90 minutes.

Both sides are missing key players for Saturday’s match. Andre Ayew is cup-tied whilst his brother, Jordan, will serve a suspension for his red card against Huddersfield. Harry Kane will be out for Spurs after his horror injury against Bournemouth.

The hosts are currently 14th in the Premier League and knocked out Sheffield Wednesday in the last round. Former Wednesday boss Carlos Carvalhal has seemed to bring life back into a Swansea side that was at the bottom of the table upon his arrival just over three months ago. Their goal scoring form has improved, having now scored two or more in 16% of their Premier League matches. They have managed to score 25 goals in their 30 appearances.

Whilst that may not seem all the impressive, they have become a much harder side to break down. The Swans have one of the best defensive records in the bottom half with 42 goals conceded. They have also kept a clean sheet in 30% of the matches; proving their defensive improvements under Carvalhal.

Tottenham are currently third in the Premier League and knocked out Rochdale in the last round. As aforementioned, the absence of Harry Kane could be crucial for Spurs as he has been the key talisman yet again this season. Kane has led a defence that has scored two or more goals in 50% of their Premier League matches. Heung-Min Son will have big boots to fill however many believe he will be up for the task. The South Korean has 12 goals and 4 assists in the Premier League campaign.

Spurs have also been defensively exemplary. They have only conceded 25 goals and kept a clean sheet in 46% of their matches. Both Jan Vertonghen and Davinson Sanchez are building a very stable and effective partnership at the back.

The referee for this fixture will be Kevin Friend. He shouldn’t have too many cards to show as both sides are well disciplined. Sours have averaged 14 booking points whilst Swansea have averaged 13.8. However, with high stakes it could become a feisty encounter.

Swansea City vs Tottenham will be televised live in the UK on BT Sport 1 with kick off at 12:15 GMT.