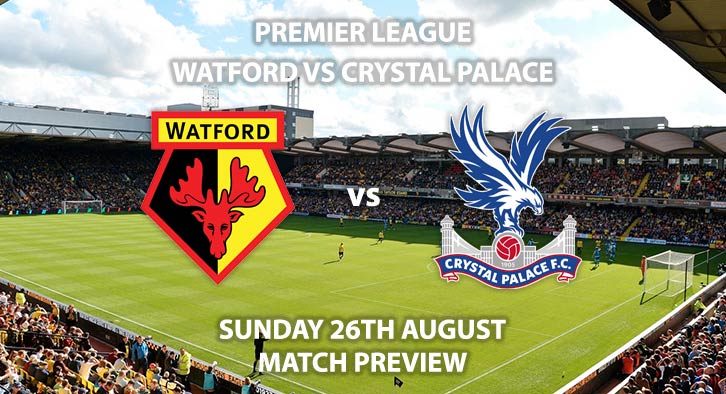 Both clubs have begun their campaigns in a positive fashion. Watford have won both their matches whilst Crystal Palace won on the opening weekend. Neither club will have their eyes set on anything more than a midtable finish for the season however both will expect to get point from a match like this.

The hosts have got off to a flyer and are priced by SkyBet at 6/4 to continue their winning streak. A dominant display on the opening day against Brighton was followed up by a clinical showing away at Burnley that has seen them bag five goals and concede only one. Argentinian midfielder Roberto Pereyra has looked a bright spark in attack and has already scored twice this season. He’s priced at 9/1 to break the deadlock this Sunday.

The Hornet’s rely on their commanding midfield to dictate the tempo of matches as well as get stuck in. Midfielder Will Hughes is living up to his reputation and many believe he could be a key figure on the right wing. The stamina and grit of Abdoulaye Doucoure and Etienne Capoue in the middle could see Palace struggle to break through the lines of midfield to attack. A team in good form – worth backing at their price.

Crystal Palace – priced at 19/10 – were unfortunate in their last outing to come out with a 2-0 loss to Liverpool. A penalty decision that split opinion was converted by James Milner before a trademark late counter attack sealed the 2-0 victory for Klopp’s side at Selhurst Park. However, there were many promising signs for The Eagles. Wilfried Zaha looked dangerous once more and is priced at a tempting 2/1 to score anytime. Andros Townsend and Jeffery Schlupp had plenty of positive moments on the wings and new signing Max Meyer also impressed when introduced. Their fluid attack was very unfortunate to not score against Liverpool but is priced well at 15/8 to score 2+ goals this Sunday.

The referee for this match will be Anthony Taylor. The official has averaged only 15 booking points in his two matches so far. Don’t expect too many cards.

Watford vs Crystal Palace will be televised on Sky Sports Premier League in the UK and kicks off at 13:30 GMT.

Odds and markets last updated on Saturday 25th August 2018 @20:04 GMT. Keep checking back to see if there’s any updates to markets – the time stamp in the previous sentence for when we update tips on this page will be updated.