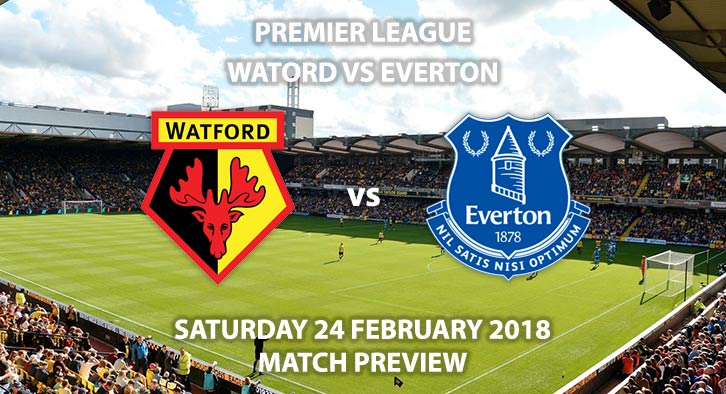 Watford vs Everton – Watford will host Everton in Premier League action at Vicarage Road this Saturday in the late kick off. Both sides in mid-table positions however are watching over their shoulders, rather than what’s going on higher up in the table.

Watford are currently 11th in the Premier League however that means very little this season. Incredibly, they are only four points from the relegation zone which means they are fully involved in this massive Premier League relegation scrap. The Hornet’s have managed to accumulate 30 points from their 27 matches. Whilst at times their football hasn’t been extremely attractive or appealing, it has been efficient. Watford have scored two or more goals in 51% of their Premier League matches – striker Abdoulaye Doucoure leading the line with 7 goals and 2 assists. Their discipline however has not been too fruitful for the club, who have averaged 20 booking points this season.

The man in charge is Anthony Taylor, who is renowned for being a no-nonsense official in the Premier League. He has brandished an average of 37.2 booking points in his 18 Premier League matches.

Everton are currently ninth in the Premier League standings, with a little more breathing space than their opponents this Saturday. All in all, given the money spent over summer, Everton fans have been disappointed with the little progress the team has made. Veteran striker, Wayne Rooney has rolled back the years as he has proven to be the Toffees biggest goal threat with 10 league goals with two assists. Goals have been hard fought for Sam Allardyce’s men – especially on the road. They have only scored two or more goals in 7% of their away league matches this season.

The game will be tight to call, with both sides sharing similar recent form. There is no doubt that Everton possess a stronger squad that could pop up with a moment of magic; with Icelandic midfielder Gylfi Sigurdsson springing to mind. Watford have tightened up at the back following Marco Silva’s departure, with their 4-1 win over Chelsea being the most memorable moment of their recent fixtures.

Watford vs Everton will be televised on  BT Sport 1 with kick-off at 17:30 GMT.

More markets will be added over the weekend prior to the game kicking off tomorrow evening. Keep visiting the tips and preview area for further updates and betting previews for this weekend’s fixtures.