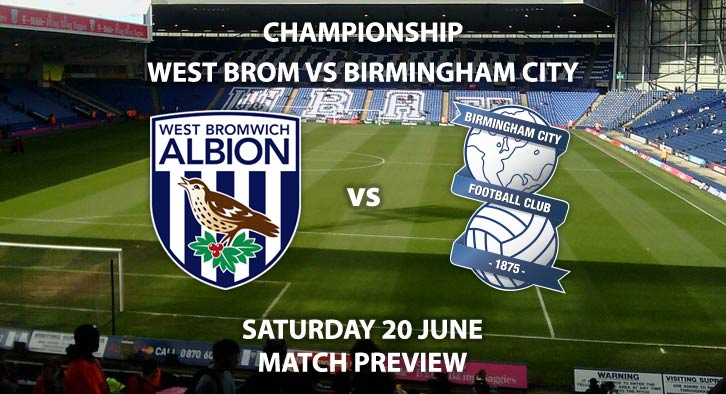 The Championship is back this weekend as West Bromwich host midlands rivals Birmingham City this Saturday afternoon.

West Brom are hoping to clinch automatic promotion back to the Premier League, as they currently sit second – one point behind league leaders Leeds. Meanwhile, Birmingham are fighting away in mid-table after some poor form before the lockdown enforced by the coronavirus pandemic.

West Bromwich Albion are favourites for this match and are priced at 4/7 to win by SkyBet. Whilst their league position makes for great reading, their form before the lockdown was not ideal for the Baggies – who were winless in three matches across all competitions. However, on their day they have embarrassed teams and have the joint top goals scored in the league.

In attack, Hal Robson-Kanu has provided the most goals with ten for the season so far. He is priced at 11/10 to score anytime.

Birmingham City have a tough task ahead of them on their return to the league and are priced at 17/4 to claim a shock away victory. The Blues have had a rather up-and-down season, with their performances before the enforced break taking a dive. They are without a win in six matches but have proved to be difficult to beat with four of those matches ending in a draw.

Going forward, Scott Hogan has been on the club’s brightest stars with 10 goals this term. He is priced at 9/4 to add to his tally on Saturday.

Last time these two met, a late Charlie Austin double at St Andrews secured a 3-2 victory for the Baggies in one of the matches of the season. 40 booking points were brandished and SkyBet are offering 4/5 for another 40 booking points to be awarded during this fixture.

The match will be televised on Sky Sports Football HD and kicks off at 15:00 BST.

– The hosts have far too much quality all over the pitch and should have no trouble dispatching their opponents.