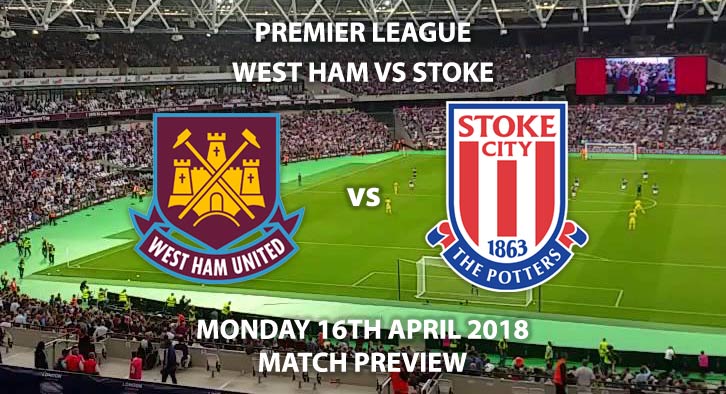 West Ham United vs Stoke City: West Ham host Stoke in a relegation ‘six-pointer’ at the Olympic Stadium as they bid to move further clear of the drop zone.

The Hammers grabbed a vital point last weekend in their 1-1 draw with Chelsea. David Moyes’ team showed great character to battle back from a goal down away from home, with substitute Javier Hernandez grabbing the equaliser. They currently sit 14th, six points clear of relegation and seven in front of their visitors. After a run of one win in seven league games, West Ham appear to have turned a corner. Having recently beaten fellow relegation strugglers Southampton convincingly at home they will be hoping for another commanding display. Marko Arnautovic has been key in recent months. The Austrian has nine goals in 16 league games since December and has been the bright spark in the Hammers’ poor season.

Stoke fell to yet another defeat last weekend, losing 2-1 at home to Tottenham. The Potters are four points adrift of safety with only five games left to play. With fixtures against Burnley, Crystal Palace and Swansea yet to come, their future is still in their own hands. They can’t afford to lose games like this, though. They need to get points on the board, quickly and this starts with Monday night’s game. Stoke haven’t won away from home this calendar year. Their last victory on the road came in November last year against Watford. Despite winning his first match in charge, Paul Lambert has now endured nine games without victory. If Stoke are to turn the corner, it needs to be now.

Michael Oliver is the referee for Monday’s clash. The Englishman was embroiled in controversy last Wednesday as he awarded a last-minute penalty to Real Madrid in their Champions League tie against Juventus. Oliver has an average booking points total of 38.3; one of the league’s highest. As a result, I’d advise for a maximum of 40+ match booking points.

West Ham have performed well in their last two games. The Hammers, however, have the habit of self-destructing and I fear that could happen if they were to go behind in this game. Despite this, I still think they will win this game. Stoke’s poor away form has shown little sign of improving. Therefore, I’m predicting a home win.

West Ham United vs Stoke City will be televised live in the UK on Sky Sports Football with kick-off at 20:00 GMT.

Odds and markets last updated on 16th April 2018 @16:40 GMT. Markets unlikely to be updated prior to kick off.