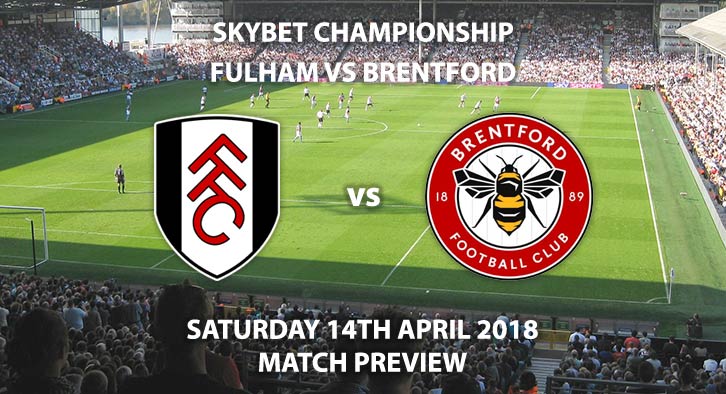 Fulham vs Brentford: Fulham will be looking to continue their push for automatic promotion as they host Brentford at Craven Cottage in a London derby.

Fulham moved into second place in midweek following their 1-0 win over Reading. The Cottagers are a point clear of Cardiff City, who do hold a game in hand. Slaviska Jokanovic’s men have embarked on a 20-match unbeaten championship run; including eight wins from their last nine games. They have won 11 of their last 12 home games, making Craven Cottage a fortress. There is no doubt that they are the league’s form side, approaching the end of the campaign. Should they miss out on a top-two finish, that momentum could be vital ahead of the play-offs. After losing last year to Reading in the semi-final, they will be hoping to secure promotion this time around. Alexandar Mitrovic has been key to their run of form. The Newcastle loanee has 11 goals in his last 11 games.

Brentford appear to have just fallen short of the play-offs. The Bees are fourth points behind sixth-placed Millwall, with four games left to play. With a number of teams in and around the chasing pack still to play each other, there is still a chance for them to sneak in. If Dean Smith’s side are to manage a top-six finish, they need to win all their remaining games. Brentford have, again, defied the odds after losing yet more key players. The departure of Harlee Dean, Jota and Lasse Vibe hasn’t dented their efforts at challenging at the right end of the table. Brentford are unbeaten in five games, winning their last three.

Neil Swarbrick is the referee for Saturday’s tea-time kick-off. The Englishman has spent most of his time in the Premier League this season. He has officiated 18 top-flight matches and just one Championship games. He has an average booking points total of 26.7, which is relatively low. Consequently, I’d advise a maximum of 30+ total booking points, or 20+ each team.

Fulham look unstoppable right now, which could be their biggest danger. The Championship is an almost unpredictable league, which can see any team beat another. Therefore, I do think they will secure another win at home, although it will be a close game.

Fulham vs Brentford will be televised live in the UK on Sky Sports Football with kick-off at 17:30.