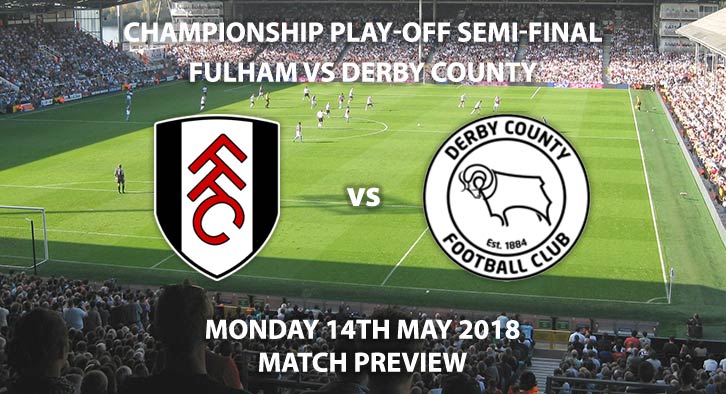 Fulham vs Derby: Fulham will be looking to overturn a one-goal deficit when they host Derby in the second-leg of their Championship play-off semi-final.

The Rams’ 1-0 win on Friday night has given them a slender advantage heading into the second-leg. Cameron Jerome’s 34th-minute header was enough to seal the win, with Derby defending magnificently to preserve their lead. Fulham recycled possession well as always but just didn’t penetrate in behind the Derby rear-guard often enough. Alexandar Mitrovic was well marshalled by the impressive Curtis Davies, whilst Tom Cairney and Ryan Sessegnon remained elusive throughout. If Fulham want to edge their way back into this tie, they need to find a way to move the ball quicker. There wasn’t enough tempo to the Cottagers possession play; making it easy for Derby to repel their attacks.

After falling short at the final hurdle, there are huge questions hanging over Fulham. Will missing out on automatic promotion derail their promotion push all together? With their 24-match unbeaten run coming to an abrupt end, can they get back to winning ways? Brighton never recovered from missing out on promotion on the final day two years ago and we could be seeing the same from Fulham. The Cottagers have, however, won 12 of their last 14 home league games, with their last defeat at Craven Cottage coming in November last year. Fulham fell at this stage last season; losing 2-1 to Reading over two legs. Whether they can end their play-off curse remains to be seen.

Chris Kavanagh is the referee for this crucial game. The Englishman has only officiated seven games this season in the Championship, with most of his appearances coming in the top-flight. Kavanagh has accumulated an average booking points total of 38.7 from 15 Premier League matches, which is one of the highest in the league.

I’m really not sure how this will play out. Fulham could easily produce a similar display as on Friday night, or come out the trams and blow the Rams away. I’m going to edge with Fulham to win in 90 minutes, although it could be anyone’s game after that.

Fulham vs Derby County will be televised live in the UK on Sky Sports Football with kick-off at 19:45 GMT.